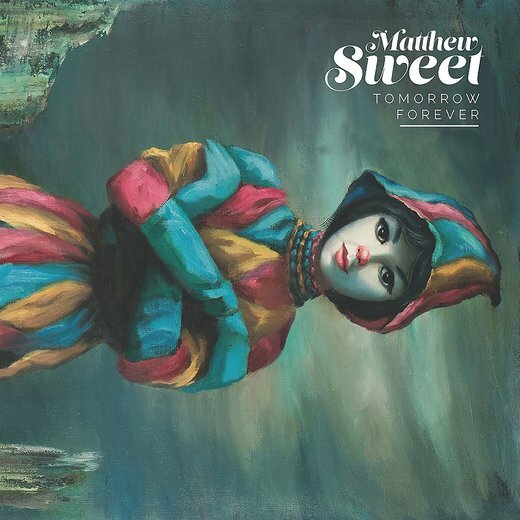 ★   “I’ve been learning some of the new songs for some acoustic shows I’m going to do out in New York when the album is released,” Sweet says. “They all seem good and strong as acoustic songs, which means they’ll be good electric. When they work after you’ve stripped them all the way down, you know they’ll be good when the rest of the band plays them.”

© Photo credit: Evan Carter
Born: October 6, 1964
Location: Lincoln, NE ~ Los Angeles, CA
Album release: Jun 16, 2017
Record Label: Honeycomb Hideout/Sony RED
Duration:     59:05
Tracks:
01 Trick     3:40
02 Entangled     2:47
03 Pretty Please     2:32
04 You Knew Me     2:51
05 Circle     3:03
06 Haunted     4:20
07 Country Girl     3:45
08 Off the Farm     2:39
09 Nobody Knows     2:25
10 The Searcher     4:20
11 Music for Love     2:44
12 Bittersweet     4:08
13 Come Correct     3:27
14 Finally     3:39
15 Carol     3:37
16 Hello     4:53
17 End Is Near     4:15
Description:
★   The 17~track long~player is a follow-up to 2011’s Modern Art, although he did issue Under The Covers Vol 3 with Susannah Hoffs in between.
★   You can preview the new single Trick on Spotify right now and the album can be pre~ordered on 2LP vinyl and CD. Tomorrow Forever is the first album recorded after Sweet moved back to Nebraska and features guests such as Rod Argent (piano on a couple of songs), the Bangles’ Debbie Peterson and Jayhawks’ frontman Gary Louris.
★   The album was originally funded by Kickstarter, where if you pledged $10,000 you could get Matthew to “produce/engineer/mix a song from his home studio with you” and “spend 2 days with him in the studio!”
Review
Written By Hal Horowitz // June 15, 2017 // Score: 3½
★   What year is this anyway?
★   It’s impossible to tell, at least by pushing play on Matthew Sweet’s first album of originals in six years. The opening “Tricky” bursts out with the same power pop crunch riffs, instantly memorable melody and eternally boyish vocals he patented on his 1991 classic Girlfriend.
★   While Sweet doesn’t have edgy guitar NYC  foils like the legendary (and late) Robert Quine, Television’s Richard Lloyd, Lloyd Cole or pedal steel master Greg Leisz to bring skronky authenticity as he did on that release 26 years ago, veteran drummer Ric Menck remains from those sessions. Still, it’s not a stretch to say that almost any of these 17 slices of chiming guitar based pop rock could have been included in Girlfriend or its 1993 follow~up, Altered Beast.
★   This collection was inspired by a move back to Sweet’s native Omaha, the loss of his mother and the romantic complexities that have often turned up in his work. On “Haunted” he sings, “Long gone love/ nothing can survive the cold/ haunted/ old old, old old love” with surprise piano from Zombies founder Rod Argent. It’s followed by the acoustic strum underlying “Country Girl,” where he seems to rejoice in a new relationship backed by the sumptuous harmony vocals of guest Gary Louris. While the Jayhawks frontman only appears on one other track (the dreamy, retro “Nobody Knows,” one of the disc’s highlights), the combination holds promise of future collaborations, since the two are similarly based in strummy, hooky Americana pop.
★   There’s a darkness and bleak honesty to Sweet’s lyrics that often belie the catchy tunes underneath. On “The Searcher,” he associates the plight of a surfer waiting for waves with the protagonist who is a “searcher for meaning,” all to a thumping, near Crazy Horse~styled lope.
★   If there is a downside, it’s the sprawling 17 songs (also available as a twin vinyl package), where the similar approach starts getting predictable, if not quite stale, as the hour long disc heads through its final third. Like most double albums, this one could do with some judicious editing. It’s a logical reason to bring in an outside ear which, with multi~instrumentalist singer~songwriter Sweet credited as producer, engineer and mixer, hasn’t happened here.
★   Regardless, Sweet fans who are a bit of a cult at this stage, will rejoice with this reflective new music. It’s not like the good old ‘90s when you could depend on another pretty great crackling batch of gems every two years as Sweet was in the habit of doing.
★   Perhaps with its archetypal sound and characteristic tough/tender performances a better title would be “Yesterday Forever.”   ★   https://americansongwriter.com/

About Matthew Sweet
★   After spending the ‘80s as an unappreciated jangle pop guitarist with Oh~OK and Lloyd Cole, as well as a solo artist, Matthew Sweet emerged in 1991 as the leading figure of the American power pop revival. Like his British counterparts Teenage Fanclub, Sweet adhered to traditional songcraft, yet subverted the form by adding noisy post~punk guitar and flourishes of country~rock, resulting in an amalgam of the Beatles, Big Star, R.E.M., and Neil Young. Recorded with guitarists Richard Lloyd and Robert Quine, Sweet’s third album, Girlfriend (1991), became a word~of~mouth critical and commercial hit over the course of 1992, with its title track reaching the Top Five on the modern rock charts. For the next five years, as alternative rock was the dominant commercial force in rock & roll, Sweet was a popular concert attraction, and his reputation as an alternative pop singer/songwriter was at its peak: his next two records, Altered Beast (1993) and 100% Fun (1995), were both critically acclaimed and relatively successful albums, with the latter reaching gold status and making many year~end best~of lists. Beginning with 1997’s Blue Sky on Mars, Sweet settled into cult status, and while he wasn’t enjoying the success of his previous records, most power pop records of the latter half of the ‘90s were indebted to Girlfriend. Matthew Sweet began playing music while he was a high school student in his native Lincoln, Nebraska. Upon his graduation in 1983, he decided to attend the University of Georgia in Athens because of its burgeoning underground music scene. Once he arrived at college, he met Lynda Stipe and joined her band, Oh~OK, in time to play on their second EP, the Mitch Easter~produced Furthermore What, which was released late in 1983. The following year, he and Oh~OK drummer David Pierce formed Buzz of Delight, releasing Sound Castles later that year. Over the course of 1984 and 1985, Sweet cut a demo tape with producer Don Dixon. Columbia Records heard the Buzz of Delight record and the demo and offered him a contract in 1985. Upon signing with Columbia, he relocated to New York and recorded his debut, Inside. Released in 1986, Inside featured Sweet playing nearly all of the instruments on the record, supported by a drum machine; the album also featured several cameos, including Chris Stamey, Fred Maher, Anton Fier, and Aimee Mann. That same year, Sweet guested on Blast of Silence, an album by Fier’s band the Golden Palominos. Despite positive reviews, Inside was ignored upon its release and Columbia dropped Sweet. In 1988, he signed with A&M Records and recorded his second album, Earth. Produced by Fred Maher and released in 1989, Earth again featured Sweet as a one~man band, augmented by guitarists Robert Quine (Lou Reed, Richard Hell) and Richard Lloyd (Television). The album failed to make any impact, and A&M dropped Sweet as he was working on his third album in 1990. Over the next year, he earned money by touring as Lloyd Cole’s guitarist while shopping a demo of his album to various labels, with little success. Eventually, the president of Zoo signed him upon overhearing the demo in an office. Girlfriend, an album largely inspired by the dissolution of his marriage, was the first album Sweet recorded with a live band, and its sound — which was powered by Lloyd and Quine — was considerably more immediate and raw than its predecessors. Upon its late 1991 release, Girlfriend earned strong reviews and “Divine Intervention” became a moderate hit, but it wasn’t until the spring of 1992, when the title track took off, that the album became a genuine hit. By the end of the year, Girlfriend had gone gold and Sweet had moved to Los Angeles. Sweet recorded the follow~up to Girlfriend with producer Richard Dashut, who had previously been best known for his work with Fleetwood Mac and Lindsey Buckingham. Again featuring Quine and Lloyd, the resulting Altered Beast was messier than Girlfriend and consequently received mixed reviews upon release in early 1993, yet it became a sizable college radio hit on the strength of the modern rock and MTV hits “The Ugly Truth” and “Time Capsule.” After releasing the stopgap EP Son of Altered Beast in the spring of 1994, Sweet recorded his fifth album, this time with a more commercial producer — Brendan O’Brien — who had previously worked with Pearl Jam and Stone Temple Pilots. Released in the spring of 1995, 100% Fun received Sweet’s strongest reviews to date and went gold on the strength of “Sick of Myself,” his first single to scrape the bottom reaches of the pop charts. Following 100% Fun, Sweet parted ways with Lloyd and Quine, but retained O’Brien for 1997’s Blue Sky on Mars. Despite the strong initial placing for its lead single “Where You Get Love,” Blue Sky on Mars received mixed reviews upon its spring release, and it failed to match the success of its immediate predecessor. In Reverse followed in 1999, and the best~of collection Time Capsule arrived a year later. Hip~O released To Understand: The Early Recordings of Matthew Sweet in 2002, a collection that Sweet followed up with the Japanese~only release Kimi Ga Suki Raifu. He returned to the domestic studio in 2004 for Living Things, followed by a collection of choice covers with ex~Bangle Susanna Hoffs called Under the Covers, Vol. 1 in 2006. In 2008, Sweet released Sunshine Lies, an all~new collection of studio material that was warmly received by both fans and critics alike, followed by Under the Covers, Vol. 2 (again with Hoffs) in 2009. Two years later, Sweet hit the road in celebration of Girlfriend’s 20th anniversary, playing the album in its entirety each night. That same fall, he also released a new record, Modern Art. Sweet once again teamed with Hoffs in 2013 for their third collection of covers. Released in November 2013, Under the Covers, Vol. 3 focused on songs from the ‘80s. In June 2017, Sweet returned with Tomorrow Forever, his first collection of original songs in six years. ~ Stephen Thomas Erlewine
Website: http://www.matthewsweet.com/
Twitter: https://twitter.com/iammatthewsweet
Facebook: https://www.facebook.com/iammatthewsweet