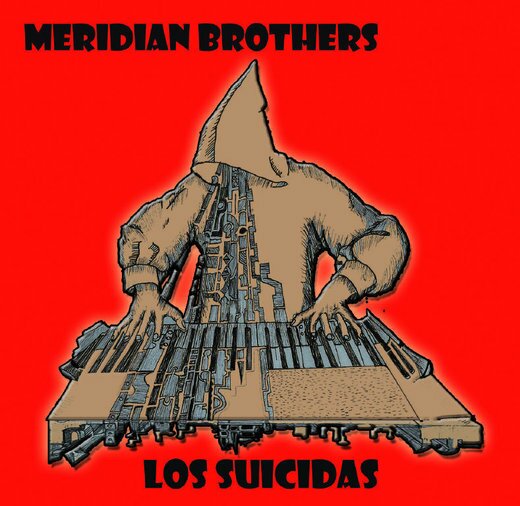 ♠   The creation of Eblis Alvarez, this Bogota unit weds vanguard electronic music to pan–Latin traditional sounds, Latin rock, surf, and psychedelia.
Location: Bogotá, Colombia
Genre: Electronic, International Latin Pop/Rock
Release date: November 11, 2015
Record Label: Soundway
Duration:
Tracks:
1 Vértigo
2 Dinamita
3 Delirio
4 Contienda
5 Idilio
6 Lágrima
7 Cazador
8 Amargura
♠   The genre–crossing 8–track album is the first of a trilogy, inspired by one of the Colombian–native’s local legends Jaime Llano Gonzalez, a Colombian Hammond organist famous for playing traditional Colombian music such as Pasillos, Bambucos, Cumbias, and foreign rhythms such as foxtrots or waltzes, in an ambient style.
♠   https://www.soundwayrecords.com/
AllMusic Review by Thom Jurek;  Score: ****
♠   The Meridian Brothers’ Salvadora Robot was one of 2014’s quirkiest and most musically compelling recordings. The Colombian ensemble was founded by composer, multi–instrumentalist, and strategist Eblis Álvarez, who is also a member of Los Pirañas, Frente Cumbiero, and Chúpame el Dedo, with Pedro Ojeda of Romperayo. Álvarez composes, produces, arranges, and often plays everything on the studio records himself. Los Suicidas, the first album in a projected trilogy, is even loopier than its predecessor. Alvarez has always been intrigued by organ music. To that end, the inspiration here is the music of Hammond wizard Jaime Llano Gonzalez, a Colombian music legend whose command of traditional national styles such as pasillos, bambucos, and cumbias was equalled only by his innovation of juxtaposing against foreign rhythms — foxtrots, waltzes, boogaloos, etc. — often presenting them in an easy listening style. He is regarded by some as Colombia’s Raymond Scott. Álvarez pays him great tribute by using a variety of chap synths to emulate the mighty organ’s many sounds. Most of the album comes off sounding like chiptunes played by Walter Wanderley at the wrong speed. Highlights include the single “Vertigo,” with its samba bassline, 8–bit staggered poly–melodies, and looped budget drum machines. Though it’s in 4/4, there are polyrhythms stacked off the main one with echo–plexed chords and single lines that create a spaced–out, exotic, tropical feel. “Delirio” sounds exactly like its title, with vocals even more whacked–out than the keyboards; the speed of the rhythms increases throughout the piece until it blurs and has to find some track to get back on. “Conteinda,” with its cinematic vocal — a cowboy growl during a cattle drive — and a popping cumbia rhythm accented by vallenato handclaps, has two counterpoint melodies erupting from the center. The tune would have made Frank Zappa and Les Baxter proud. The cut–time cumbia bassline in “Idilio” is offset by pumping, simulated B–3 chords and a swirling melody that sounds like a tape of a circus organ stretched beyond repair. Closer “Amargura” sounds like two demos stitched together for a minute, then lo–fi rhythm tracks meet a furious organ, swooping analog synth lines, and an upright bassline covering the chord changes. Its title translates as “grief” although it sounds like anything but. Throughout Los Suicidas, Alvarez’s humor is ever present; that said, the music is provocative, strange, and mysterious. While a first aural helping may involve some head scratching, further encounters with this set will only result in delight. ♠   http://www.allmusic.com/
_____________________________________________________________