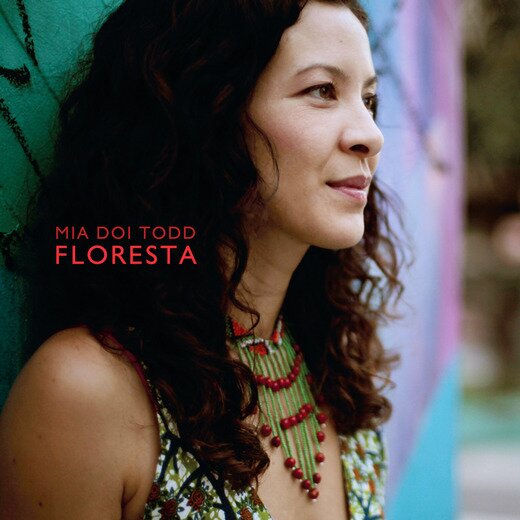 Review by Thom Jurek; Score: ****
Ξ↑Ξ  "In 2009, songwriter Mia Doi Todd toured Brazil. On 2011’s Cosmic Ocean Ship, she included a cover of Baden Powell’s “Canto de Lemanjá” and wrote “Paratay,” her own version of a bossa nova.
Ξ↑Ξ  These exercises and a lifelong love of the country’s music went into Floresta, a covers collection of Brazilian songs, a foregone conclusion. In 2009, she met percussionist/drummer Mauricio Takara (Rob Mazurek Octet, São Paulo Underground). Ξ↑Ξ  His family owns Estudio el Rocha in São Paulo, where this set was recorded. Together they enlisted a Brazilian band that includes seven-string guitarist Fabiano do Nascimento, who, like Todd, now lives in Los Angeles. Her other sidemen all play music in a variety of genres and grew up with the songs chosen here, but had never played them.
Ξ↑Ξ  The material encompasses the rainbow offering of Brazilian song. While there are classics here, including Tom Jobim’s “Chovendo Na Roseira” and Tom Zé’s “Menina Amanhã de Manhã” — both sambas from different sides of the spectrum — there are also traditional songs such as “Ewe,” which came to Brazil via West Africa and Yoruban sources. Interestingly, despite the band’s pedigree, there is an unmistakable, laid–back, L.A. post–hippie feel here. It’s loose, but focused on nuance and essence. Todd’s reading of Joyce’s “Misteriosos,” from the classic Feminina album, seamlessly melds bossa and MPB. While Caetano Veloso’s “Luz du Sol” is as lithe as one might expect, the opposite is true in the two songs by Milton Nascimento. “Portal da Cor” is poignant and striking in a far more skeletal arrangement, while “Cais” is more structured than the songwriter’s ballad from Clube Da Esquina — his album–length celebration of the artists of Minas Gerais — yet no less dreamy. There is a gorgeous version of Antonio Candeia’s forlorn, minor–key, Latin–flavored samba “Preciso Me Encontrar” (from his 1976 album Cartola). It is less dramatic than the songwriter’s or the duet by Marisa Monte and Zeca Pagodinho, but no less powerful. With her airy, slightly smoky alto, Todd approaches this material with respect and as someone to whom these songs mean a great deal (check her reading of Dori Caymmi’s profound “O Vento”). As an interpreter she sings like she wants to share these songs, rather than leave her mark on them. The academic construct of authenticity isn’t an issue because her encounter with this material is emotionally true. Add to this that she had to learn to sing them in Portuguese and the musicians were playing them often for the first time, and the spirit of discovery is rife. Floresta is a gem. It brings the honesty of Brazilian music in all its harmonic and poetic richness to listeners without artifice or affectation."
In french:
Ξ↑Ξ  Une superbe sélection de reprises de chansons brésiliennes.

Biography
Ξ↑Ξ  A singer and songwriter whose music embraces a rich variety of cultural and creative influences, Mia Doi Todd was born June 30, 1975 in Los Angeles, California. Ξ↑Ξ  Todd grew up in a creative household; her father, Michael Todd, was a sculptor of note, and her mother, Kathryn Doi Todd, was an Associate Justice in the California Court of Appeals, as well as a patron of the arts who has helped bring traditional Japanese dance and theater troupes to Los Angeles. As a child, Todd became involved in theater and choral performance and studied classical vocal technique. As a teenager, she began writing songs, influenced by the work of the Beatles, Leonard Cohen, and particularly Joni Mitchell, and her work developed a keener focus when she moved east to attend Yale University and became interested in indie rock.

© Carl Lindström, Divulgação
Ξ↑Ξ  In 1997, members of the Los Angeles–based group Further invited Todd to use their studio to record her songs; the result was her debut album, The Ewe and the Eye, a spare set of performances featuring only her vocals and acoustic guitar, which was released on Further's Xmas Records label around the same time Todd was completing her studies. She then moved to New York City, where she recorded her second album, Come Out of Your Mine, for Communion Records. After a sojourn in Japan where she studied Ankoku Butoh dance, she returned to America and recorded a third album, 2001's Zeroone, a collection of longer and more intricate songs that she issued through her own City Zen Records imprint. Todd's music soon caught the attention of Sony's Columbia Jazz division, who signed her to a recording contract. Her fourth album, The Golden State, found her re–recording many of the songs from her first three albums with more expansive arrangements and production from Mitchell Froom and Yves Beauvais.
Ξ↑Ξ  Not long after the album was released, Sony shuttered Columbia Jazz, but Todd, undaunted, continued exploring new musical perspectives on her next project, 2005's Manzanita. The album, released by Plug Research, featured performances by members of indie pop favorites Beachwood Sparks, noisy psych visionaries Dead Meadow, and dub enthusiasts Future Pigeon; a number of tracks from Manzanita were reworked on 2006's remix album La Ninja: Amor and Other Dreams of Manzanita, which also included four new songs. In 2008, Todd reactivated her City Zen label for her eighth album, GEA, in which she worked with a small acoustic ensemble and experimented with longer, more ambitious musical structures. In 2011, Todd returned with Cosmic Ocean Ship, a song cycle inspired by her spiritual and geographic journeys of the previous two years. When not busy with her work in music, she's a performer and choreographer with Body Weather Laboratory, a Los Angeles–based Butoh dance troupe. Todd returned to recording 2014 with Floresta. Featuring her favorite Brazilian songs, it was recorded in ten days at Estúdio el Rocha in São Paulo, with a cast of all–native players. It was released on City Zen in September.
Website: http://miadoitodd.com/
Facebook: https://www.facebook.com/miadoitodd
Also:
by Mark S. Tucker, ()
Ξ↑Ξ  http://www.acousticmusic.com/fame/p09946.htm
Interview, Daiana Feuer: http://lafolkfest.com/?p=311 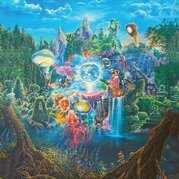