Track Listing:
01. Jim Thompson's Horse
02. My Mother Thinks I'm a Lawyer
03. Fish and Bird (featuring Aoife O'Donovan)
04. Cluck Old Hen (featuring Steve Martin)
05. Boathouse on the Lullwater (featuring Jerry Douglas)
06. Bear Dog Grit (featuring Chris Thile & Bryan Sutton)
07. Day Down
08. Milford's Reel
09. Bob McKinney (featuring Tim O'Brien)
10. Pineywoods
11. The Broken Drought
12. All Git Out
Kungfustore.com: http://punchbrothers.kungfustore.com/category/411-beat-the-devil-and-carry-a-rail-preorder/product/3134-beat-the-devil-and-carry-a-rail-cd-pik01
About Noam Pikelny:
Though Beat The Devil and Carry A Rail is banjo player Noam Pikelny’s second solo disc, it represents something of a new beginning. Even more revelatory than his 2004 debut In the Maze, it captures an artist as he unveils a developed and assured voice as musician and composer. In 2010, actor-banjo player-author Steve Martin awarded Pikelny the first Steve Martin Prize for Excellence in Banjo and Bluegrass, calling Pikelny, “a player of unlimited range and astonishing precision.” Beat The Devil is virtuosic in execution but is warm, amiable and approachable in feel. Pikelny is backed by an all-star band of old friends and long-time heroes, including fellow Punch Brothers Gabe Witcher and Chris Eldridge, bassist Mark Schatz, fiddle player Stuart Duncan, vocalist-mandolinist Tim O’Brien, and dobro player Jerry Douglas – all of whom boast impressive credentials along with Grammy nominations and other accolades in the worlds of bluegrass, folk and country. Guest stars include Punch Brothers founder and mandolinist Chris Thile, guitarist Bryan Sutton, violin prodigy Alex Hargreaves, and fellow banjo player Steve Martin, who befriended Pikelny through the New York City music scene, and invited Punch Brothers to open his 2010 Summer tour.
Pikelny recorded Beat The Devil and Carry A Rail in Nashville in April of 2011, but the album spent years in gestation, given Pikelny’s demanding schedule. Making a second album had long been on Pikelny’s to-do list. Since 2006, however, he had been primarily devoting his creative energies to Punch Brothers, the prodigiously skilled quintet that despite the stringband format, defies all genres, becoming as the Village Voice recently called them, “one of the greatest young bands in the country, bluegrass or otherwise.” The growing success of Punch Brothers, and the quintet’s daunting touring itinerary, left little time for individual projects. “The time I had to myself when I wasn't on the road or in the studio with Punch Brothers was mostly spent catching up on sleep and making sure I had clean clothes”. In fact, Pikelny realized his first solo album just weeks before first meeting Chris Thile, then a member of Nickel Creek, at the Telluride Bluegrass Festival, in June of 2004.
That chance meeting paved the way for the formation of Punch Brothers. Their sights were set high, first embarking upon Thile's album-length four-movement piece The Blind Leaving the Blind, which remains a cornerstone of the band. Pikelny was provoked, tested, inspired, and ultimately, changed by his newfound collaborators: “I was being challenged in so many ways – technically as a banjo player, conceptually as a musician. I couldn't have asked for a better situation. It was an amazing opportunity, I was being pushed so hard by the band that I felt that I was having to redefine myself on the fly as a banjo player. When I listen to my playing before Punch Brothers, to my ears, it sounds like a different person as far as feel, approach, technique, improvising... Playing with those guys even inspired me to go out and find a great old instrument.  I think my whole sound was going through a transformation.”

Resuming solo work in the midst of Punch Brothers commitments, Pikelny drew upon those experiences, infusing his album with a unique instrumental voice, but within a more traditional context.  “This metamorphosis brought upon by the Punch Brothers repertoire, interestingly enough extended itself even when I would return to playing more traditional music.  This new understanding of the banjo was creeping into to whatever I was playing.  So even if I was rendering a classic Earl Scruggs banjo tune or improvising over an old fiddle tune, the impact of Punch Brothers had become evident in my playing. I felt like it was high time to put together a record that was a little bit more connected to my roots and use some of my own instrumentals to showcase an updated version, if you will, of my banjo playing.”
On Beat The Devil, Pikelny offers eight original pieces – from intensely focused, fast-moving numbers like “All Git Out” and “Bear Dog Grit” to more pastoral, gently paced tunes like “Boathouse on the Lullwater” and  “The Broken Drought.” He recasts the frequently-recorded Appalachian folk tune, “Cluck Old Hen,” as an instrumental duet between Pikelny (on bluegrass banjo) and Steve Martin (on clawhammer banjo). Tim O’Brien adds lead vocals to 1920s-era songster Henry Thomas’ “Bob McKinney,” Pikelny also fashions a lovely cover of Tom Waits’  “Fish and Bird,” featuring a heartbreaking, vocal performance from Crooked Still vocalist Aoife O'Donovan.  Pikelny calls the track “a special tune on a couple of different levels. Tom Waits is a recent discovery of mine. Of course, it was all out there in front of me, but I had never caught on before how profound Tom Waits’ music is. Unfortunately, it was all too recent of an epiphany. The only other personal discovery on this level has been falling in love with John Hartford’s music over the last three or four years. He was one of the most unique and virtuosic banjo players, and wrote some of the greatest songs of all time. These guys are the gold standard, if you ask me. On ‘Fish and Bird’ there was a sweet collision of these worlds, as the key Aoife wanted to sing in warranted playing a low-tuned banjo, something that was one of John Hartford's signature sounds. When I got to Nashville, I asked Bela Fleck if he would consider loaning me John Hartford's old banjo that he acquired after John's passing.  Bela was gracious enough to make it available. I was hesitant to ask, but Bela said that’s exactly what Hartford would want, for people to be using his instruments to make music. I was really honored by that. It was a meaningful, yet unforeseen union of the music of two men who have really moved me as of late.”

Pikelny says Beat The Devil and Carry A Rail was deeply informed by several people who inspired him as he was coming up in the ranks, and he feels lucky to have recruited many of them for the sessions: “I became really excited about the idea of reconnecting with some of my friends and heroes in Nashville that I had only gotten to play with informally at festivals, guys like Tim O’Brien, Stuart Duncan, Jerry Douglas & Mark Schatz.  It was the thrill of a lifetime to share a stage with these people, but I had never gotten to be in the studio with any of them. Based on the material I was amassing, I realized that I should make a somewhat traditional banjo record and call these guys. I wanted that experience, to be in the studio with these heroes for a week, not just because of the music we would capture, but to get to know these guys better, to hear their stories. They shed so much light on the history of the music. It was so meaningful to get a better understanding of these folks who I've looked up to for years, to learn more about their background and motivation. I came out of this experience with so much more than the files that became this record.”
Noam called on his Punch Brothers fiddler Gabe Witcher to produce the album. “When I first started imagining this record, I knew I wanted Gabe to produce it,” Pikelny says. “He has been such a powerful force during the recording of the Punch Brothers records. I had been extremely impressed by Gabber's poise when we've been in the studio. Also I've always taken note of how extraordinarily committed he has been to absorbing as much studio and recording wisdom from the ridiculously talented people we've been lucky enough to be around while in the studio. I couldn’t think of anybody who knows my playing better than Gabe. This is the first album where he is the official producer. I thought that would be a healthy challenge. I knew I made the right choice when a couple hours into the first day while I found Gabe outside, on a break, pacing around the parking lot smoking a cigar while on a cell phone. Now that's a producer.”
Rising to the occasion is in many ways a theme of the album, and the underlying meaning of its title.

Noam Pikelny and his Nechville in Richmond with Chris Thile.

Pikelny, now based in Brooklyn, explains: “I've always loved the South and Appalachia. I obviously have fallen in love with the music, but also many other aspects of the heritage. I always love learning some of the old expressions and phrases and have made a hobby of searching through books of southern regionalisms. “Beat The Devil and Carry A Rail” stems from a bizarre and antiquated rural tradition of handicapping whoever is favored in a race or a contest by having them carry a rail. Yes, quite unbelievable – but hey, you can’t argue with something if it's in a reference book. It can mean two things. One would be to beat someone decisively, a clear victory; the other would be to triumph against all odds. The second meaning appeals to me more as something that relates to this record and the music on it. Not on a super literal level, but it definitely applies to the actual task of getting this record made.  While the album was made over the course of two months, it had been seven whole years since my last solo effort. In Punch Brothers, we had established this brain trust; we had become comfortable relying on each other to put music together as a group. It’s an extremely powerful thing to have access to that, and with each year that passed it became more daunting how to step away and finally record another project of mine. Having Gabe on-board as producer helped lessen the shock, but I was still forced out of what had become my natural habitat. So this record is a little personal triumph of mine, something of my own that makes me proud.” 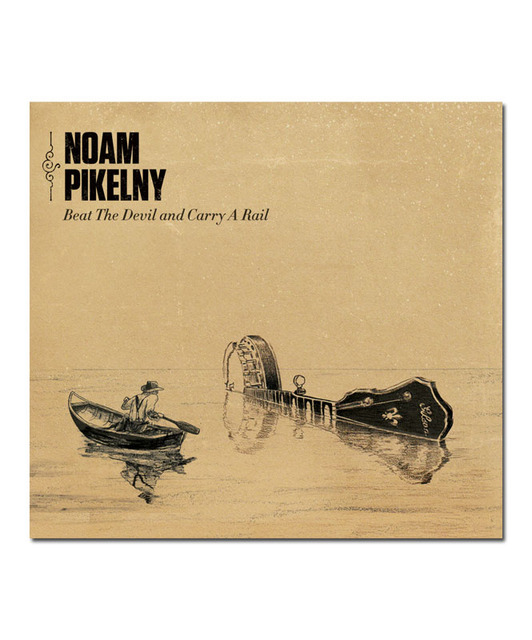