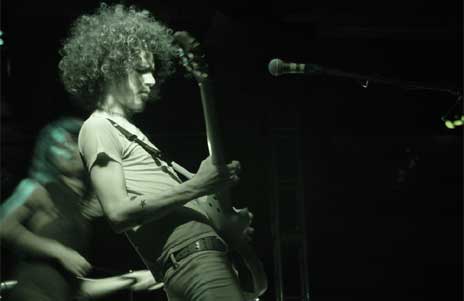 [Recently, Alternative Press did a feature called "Class of 2000," wherein they looked back at several important/influential albums that are now 10 years old. One of them was At the Drive-In's Relationship of Command. So I interviewed guitarist Omar Rodriguez-Lopez for the third time, to get his thoughts on that record and the disintegration of ATDI soon after its release. Some of the Q&A didn't make it into the magazine, for space reasons, so here's the full transcript.]

What was your relationship with producer Ross Robinson like?
On that record, Ross basically ran the show. I was very eager to be learning at that time. I always say I’m still in training. I’m still learning, but the root of my training was from [producer] Alex Newport, who came before Ross. Then Ross and then Mario [Caldato Jr.], because De Facto—the other band Cedric [Bixler-Zavala] and I had—recorded with Mario C right around the same time. Then of course, there was Rick Rubin. My schooling was watching those guys and seeing what pieces of gear they had and asking questions about why they’d choose to use that particular gear. Ross, at that time, had the reputation for being the wild guy who would throw things or drive you around, doing things like method acting, but for whatever reason, he didn’t really do that with me. I know he threw a trash can a couple of times, and he took Paul [Hinojos, bass] and drove him in an SUV really fast through the hills in Malibu, where there was no barrier, to get his adrenaline going and recorded him that way. But with me it was a very different type of relationship.

How did Iggy Pop wind up on the record?
That was by way of Ross Robinson. He had been talking to Iggy because they were gonna work together. I don’t know if they ever did, but they’d sort of been chatting, so Ross had passed him our previous records and he liked them. So, of course I brought up the idea, “Why not [have Iggy] come and do something on the album?” Ross mentioned it to Iggy, and he was completely open to it. He came down to the studio for a whole day in which he sang [on “Rolodex Propaganda”] and did the ransom note on [“Enfilade”].

When you were making Relationship of Command, was the band already divided into you and Cedric versus the other three?
It was always like that. You see, that’s a thing people don’t understand because we never really talked about our internal affairs. There wasn’t the “reality show” approach to bands like there is now. It was like that from the beginning. It was always me and Cedric. We were in tons of bands before At The Drive-In and we continue to be in bands after At The Drive-In. It was always sort of us against particularly Jim [Ward, guitar] and his candy-coated way of doing things. For example, people always say we broke up out of nowhere and we imploded because of the popularity, and that’s something that always makes us laugh. We’re all good friends now. We all talk now. I invited Tony Hajjar [drums] and Jim and Paul [Hinojos, bass] down to my house in Mexico and had them over. I flew them down here. We’re all good friends, and we still laugh about that [rumor] because [the break up] had nothing to do with that. It was just that I felt it was our time. I felt that the lifespan of the band was over and I broke the band up. It was all personal affairs. It was very much a life thing, it had nothing to do with external pressure and all those theories. Going back to this point again about the way people say that we imploded out of nowhere, they don’t understand the context that we broke up at least three or four other times before we finally broke up. There were three or four times where I or Cedric or Cedric and I both talked about leaving the group because our desires were so different [from the rest of the band]. Looking back on it, it’s part of the beauty of that band and what made it work. It wasn’t what we wanted versus what they wanted. It was a really special dynamic, even though it was volatile in that way. It was what made the band what it was. I don’t regret it at all.

Dōitashimashite (どういたしまして, "You're Welcome") is a live album released by Omar Rodríguez-López which was recorded over four nights in September 2010. It is the second live album to be released by the Omar Rodriguez Lopez Group, with the first being the live studio album Los Sueños de un Hígado. The album features a song currently unreleased in studio album. It should be noted that during the week of these four concerts, Ximena was said to be suffering from laryngitis, a cold, and the flu.