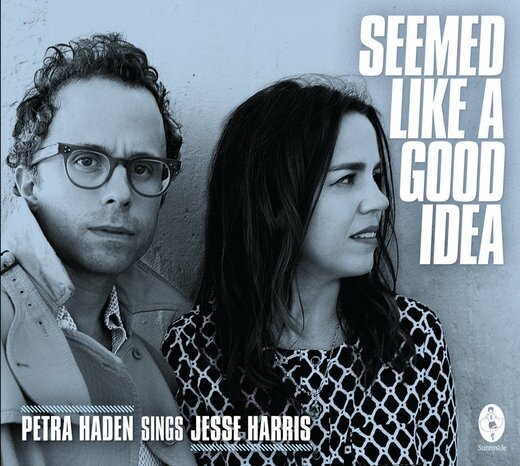 ♠   THIS IS EXQUISITE CHAMBER ROCK. IT IS ORGANIC, FREE–RANGE, ARTISANAL POP MUSIC. IF KALE SALAD WERE TO TAKE ON THE CHARACTER OF JAZZ–INFLECTED SONGWRITING, IT WOULD BE SEEMED LIKE A GOOD IDEA. “I layer lots of vocal and violin tracks on practically all projects I do,” she notes, Whenever I collaborate with people, I want to put a part of myself into it, and to make it sound unique and different. “I’ll Petrafy it!” (Petra Haden) // Infrequently, pairings come together that make perfect sense. The meeting of two incredible musical minds can produce sound that stands distinctly apart from the work of peers, a magical culmination of the best aspects of both collaborators. In this case, two unique artists met to make art together for the first time, one, a virtuoso musician, vocalist, composer and interpreter of song, and the other, one of this generation’s greatest songwriters and producers. On their new recording, Seemed Like A Good Idea – Petra Haden Sings Jesse Harris, Petra Haden and Jesse Harris have created a powerful recording of finely wrought compositions.

Description:
♠   Infrequently, pairings come together that make perfect sense. The meeting of two incredible musical minds can produce sound that stands distinctly apart from the work of peers, a magical culmination of the best aspects of both collaborators.
♠   In this case, two unique artists met to make art together for the first time, one, a virtuoso musician, vocalist, composer and interpreter of song, and the other, one of this generation’s greatest songwriters and producers. On their new recording, Seemed Like A Good Idea – Petra Haden Sings Jesse Harris, Petra Haden and Jesse Harris have created a powerful recording of finely wrought compositions.
♠   Petra Haden’s affinity for music has led her far and wide, from jazz to classical to folk to punk. Daughter of legendary jazz bassist Charlie Haden, her name has become synonymous with eclecticism and technical brilliance. With both her voice and violin, she has collaborated with such talents as the Foo Fighters, Beck, Bill Frisell, Paul Motian and her sisters’ group, The Haden Triplets. Haden’s talents are probably best heard on her two fantastic solo records, Petra Haden Sings: The Who Sell Out (Bar–None Records) and Petra Goes To The Movies (Anti Records).

♠   Hailing from New York, Jesse Harris has been a prolific singer and songwriter since the mid–1990s, when he was signed to EMI with the group Once Blue. His output has been incredibly diverse, utilizing elements from jazz, folk and pop music to create an intelligent and honest catalog of compositions. Harris has collaborated with many fantastic artists, most notably writing songs for Norah Jones, from her groundbreaking debut (for which he won the Grammy for Song of the Year for his composition “Don’t Know Why”), and for Willie Nelson, Emmylou Harris, Melody Gardot and, most recently, with iconoclast composer John Zorn’s The Song Project.
♠   In the autumn of 2013, Haden and Harris were invited to be a part of guitarist/composer Anthony Wilson’s collective project The Curators for two nights at the Blue Whale in Los Angeles. The pair got along famously and Harris invited Haden to perform with him on a later performance at the same venue. After hearing Harris’s Borne Away album, Haden asked him if he would be interested in producing an album for her.
♠   Geography became a hindrance to their project, as Haden lives in California and Harris in New York. They were able to meet occasionally and write some songs. Harris also began to pick pieces from his repertoire that he felt Haden would command well.
♠   It wasn’t until early 2015 when Harris was in Los Angeles promoting a new recording with his group Star Rover that the two were able to get to work in earnest. They planned to go into a studio to record five or six songs but things went so well that they ended up doing an entire album worth of material, most of which was brand new.
♠   The musicians they employed were exemplary. The backbone of the group was the duo Star Rover, featuring guitarist Will Graefe and drummer Jeremy Gustin. A frequent collaborator with Haden, Gabe Noel was enlisted on bass, cello and keyboards. Needing a keyboard player, one night in Largo the duo approached the highly regarded producer and multi–instrumentalist Jon Brion, who happily accepted. ♠   Rob Moose provided strings and string arrangements and pianist Aaron Parks also provided additional Wurlitzer on a couple of tracks. Of course, Haden’s violin was featured along with Harris on guitar and keyboards. Haden’s vocal arranging is instrumental on all of the tunes.
♠   As the subtitle of the recording suggests, the majority of the compositions come from the pen of Harris. His breezy, wordless “Autumn Song” opens the album with an evocative tone poem, while “Either Way,” a vocal duet, is a loping ode to indecision. The title track is a plaintive confessional answered by the measured optimism of “Sometimes You Have To Choose Sides.” “Fool’s Paradise” has a desolate beauty, “All The Leaves” nostalgically examines emotional paralysis and the inexorable passage of time, and the gorgeous ballad “Somewhere Down The Road” is heartbreakingly assisted by subtle string swells.
♠   Harris was joined by Haden in the composition of three pieces. Written shortly after Haden’s father’s passing, “How Could I Have Known” seeks for resolution and closure. “Gone As Those Days” begins as a mournful elegy to the past, pushing through to a catharsis, while “Tell Me What I’m Supposed To Do” closes the disc in a hazy query. Harris wrote lyrics on John Zorn’s wistfully beseeching “Song of Innocence” (renamed here as “It Was Innocent”) for his Song Project, while the duo’s bouncy rendition of Pete Seeger’s “Where Have All The Flowers Gone” is a beautiful standout.
♠   On the new recording Seemed Like A Good Idea, the sum of the parts is astounding and bright. Petra Haden and Jesse Harris’s musical gifts fit aesthetically and spiritually, a tremendous achievement for these two craftsmen.
Review
BY WILL LAYMAN, 9 May 2016 / SCORE: 8
♠   http://www.popmatters.com/review/petra-haden-and-jesse-harris-seemed-like-a-good-idea-petra-haden-sings-jess/
Label: http://www.sunnysiderecords.com/
Website: http://www.petrahaden.com/
Website: http://www.jesseharrismusic.com/
Facebook: https://www.facebook.com/PetraHaden/