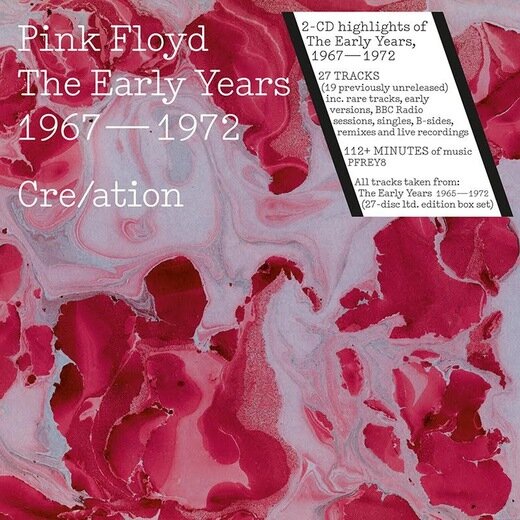 © David Gilmour & Pink Floyd in Amsterdam, March 1968.
••→   The collection explores the first seven years of the band’s 50~plus year career in a deluxe 27~disc package. It will feature 20 previously unreleased tracks and seven hours of unreleased live material. It’ll also contain over 15 hours of video, such as TV appearances, BBC sessions, outtakes, demos and three feature films — The Committee, More and La Vallee.
••→   Music from Pink Floyd~composed 1970 film Zabriskie Point has also been remixed and updated for the forthcoming box set.
••→   The Early Years 1965~1972 “will give collectors the opportunity to hear the evolution of the band and witness their part in cultural revolutions from their earliest recordings and studio sessions to the years prior to the release of The Dark Side Of The Moon, one of the biggest selling albums of all time.”

© Nick Mason during the recording of Atom Heart Mother. Photo credit: Richard Stanley from Ron Geesin’s book The Flaming Cow~ The Making Of Pink Floyd’s Atom Heart Mother
••→   “From the single Arnold Layne to the 20~minute epic Echoes, fans will see the invention of psychedelic progressive rock via an insightful collection that explores the Pink Floyd story from the time Roger Waters, Richard Wright, Nick Mason and Syd Barrett met at London’s Regent Street Polytechnic through to Syd’s departure and David Gilmour joining to form the iconic lineup.”
••→   The box set is divided into six volumes — Cambridge St/Ation (1965~1967), Germin/Ation (1968), Dramatis/Ation (1969), Devi/Ation (1970), Reverber/Ation (1971), Obfusc/Ation (1972) and an exclusive bonus disc, Continu/Ation.
••→   In addition to the deluxe set, Pink Floyd Records will also launch a 2~CD highlights album The Early Years — Cre/Ation on November 11.
••→   by Christina O’Neill, ••→   http://teamrock.com/
••→   Late Pink Floyd icon Syd Barrett to be honoured with series of films and guided walks at this year’s Cambridge Film Festival
••→   A series of films will be shown at this year’s Cambridge Film Festival to celebrate the life of late Pink Floyd icon Syd Barrett.
••→   Cambridge Live have teamed up with the Cambridge Film Trust for the event and will screen the documentary Get All That Ant? which features stills and archive footage taken during the 60s and filmed in Barrett’s hometown of Cambridge, London and San Francisco.
••→   The majority of footage has never been seen before and features live performances and stills featuring artists including Pink Floyd, the Rolling Stones, The Doors and Donovan.
••→   Filmmaker Anthony Stern says: “The film came about after a diagnosis of Parkinson’s encouraged me to make sense of the last 50 years of my life. Delving through my cellar, I found suitcases full of tapes, film reels and over 7000 still photographs from the period 1963~1970.”
••→   “This film is a homage to that time, capturing the dreams, memories and reflections that sprung from a moment when we really thought we could change the world. Fifty years on, I’m starting to think these values are starting to reemerge.”
••→   by Scott Munro ••→   http://teamrock.com/