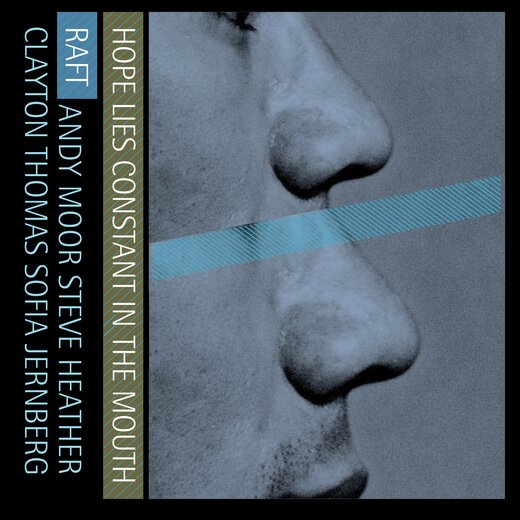 © Sofia Jernberg, photo Ziga Koritnik
≡   Raft began as a recording project, a trio of Clayton Thomas (double bass), Andy Moor (guitar) and Steve Heather (drums).  They got together to record a set of improvised pieces in a Berlin studio in 2012. Sofia Jernberg (voice) was invited later: she added her vocal improvisations and sung words written by both herself and Steve to the original music.

© Steve Heather, photo: Uli Templin
≡   Despite the slightly haphazard birth of this unusual quartet the remarkably coherent sound world that it produces makes it feel really like a band. Steve, Andy and Clayton do have quite a long musicial history together, and they make the music flow. Clayton and Steve provide a dynamic rhythm section over which’s sturdiness Andy’s guitar has great freedom to fly. The addition of Sofia’s vocals simply make all of them sound even better, it has turned the music into wonderful songs.
≡   Hope lies constant in the mouth, by Raft,  is a collection of fresh, lean, catchy rhytmic tunes with no excess: all gristle fat and bones removed.
Label: http://unsounds.com/shop/hope-lies-constant