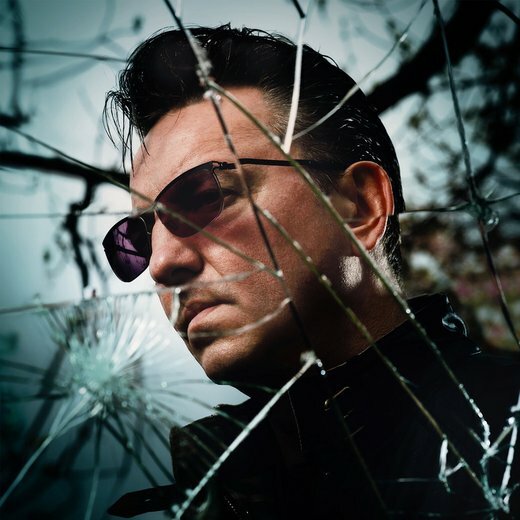 ♣•♦   Following the success of his hugely acclaimed 2012 Top Three album, 'Standing at the Sky's Edge', Richard Hawley releases his eighth studio album 'Hollow Meadows' via Parlophone Records. Recorded at Sheffield's Yellow Arch Studio in spring 2015, 'Hollow Meadows' sees Hawley return to the classic, sophisticated songwriting and subtle arrangements that made him so widely loved and revered in the first place.
♣•♦   Meditating on such themes as ageing, fallibility and relationships, much of the album shares a brooding, yet wistful and romantic atmosphere in keeping with early albums 'Late Night Final' and 'Lowedges', as well as touches of 2009's Truelove's Gutter ('Nothing Like a Friend') and Standing at the Sky's Edge ('Which Way', 'Welcome the Sun').
♣•♦   For the first time ever, Hawley demoed the songs in his shed studio (‘Disgracelands’) with his long–time guitarist and confidant, Shez Sheridan (who also co–produced the album with Hawley and Colin Elliot). This allowed him to enter the studio with fully realised songs, and many of those original demos were so strong, they form part of the finished album, including the vocal to the sublime opening track, ‘I Still Want You’ — Hawley at his most vulnerable and romantic, with one of those choruses that only Hawley seems capable of writing, like a ballroom spotlight on a glitterball.
♣•♦   In the world of HOLLOW MEADOWS, everything seems to feed into Hawley’s uniquely earthy strain of mysticism. All roads seem to lead back to the same place — literally in the case of the album’s title. In keeping with the tradition of previous albums, which all allude to places in and around Sheffield, Hawley alighted on the name Hollow Meadows which was thought to be the location of a hospital that existed as recently as the 1950s. In fact, further research yielded that the area was originally known as Auley Meadows — a name thought to derive from the Hawley family who lived there between the 14th and 17th Century.
♣•♦   The album features some notable guests from the UK folk scene; Hawley’s neighbour and friend Martin Simpson, who plays slide guitar and banjo on ‘Long Time Down’, and Nancy Kerr, who plays fiddle and viola on ‘The World Looks Down’, ‘I Still Want You’ and ‘Nothing Like A Friend’. There is also a song inspired in part by Hawley’s friendship with the iconic folk singer Norma Waterson (‘Heart Of Oak’). Other guests include one of Hawley’s oldest and dearest friends, Jarvis Cocker who plays Rheem Kee super bass on ‘Nothing Like A Friend’, and the Hick Street Chip Shop Singers, who are made up of various Sheffield luminaires, including Slow Club’s Rebecca Taylor.
♣•♦   HOLLOW MEADOWS is an album full of exceptional songwriting, beautiful melodies and harmonies, and some of the finest lyrics and vocals Hawley as ever written and recorded. It will further cement his reputation as one of Britain’s greatest songwriters of the past 15 years.
♣•♦   http://hasitleaked.com/
Website: http://www.richardhawley.co.uk/

Artist Biography by Erik Hage
♣•♦   With a melodic baritone anguish that falls somewhere in the neighborhood of Scott Walker, Pulp touring guitarist and former Longpigs member Richard Hawley began his solo career with a self–titled debut in 2001. The son of a steel worker, Hawley was raised in Sheffield, England, and grew up listening to folks such as Roy Orbison and Elvis Presley. He learned guitar at an early age from his father and uncle. During the '90s he built up a reputation as an ace guitarist and, besides his stints in Pulp and Longpigs, did session work for U.K. artists such as Robbie Williams, Beth Orton, and All Saints. He released his self–titled debut in April 2001. Hawley's sophomore effort, Late Night Final, which cloaked his sweet baritone and heart–worn songs in lush arrangements, followed in 2002 on Bar–None Records. Hawley toured behind the album, opening for the likes of Coldplay and Pulp. Also in 2002, Hawley and Pulp leader Jarvis Cocker recorded a track for the tribute album Total Lee! The Songs of Lee Hazlewood. The next year, Hawley returned with the personal Lowedges, which was named for a place just outside his native Sheffield. In September 2005, Hawley released his first album for Mute, the bittersweet Coles Corner. He followed it in 2007 with Lady's Bridge. Hawley was approached by Mute label boss Daniel Miller, who asked him if he had an album in him he'd always wanted to make regardless of commercial concerns. Hawley responded in the affirmative and underscored his remark with, "There won't be any singles on it." Miller told him to go ahead and record it anyway. That album, Truelove's Gutter, was released by the label in 2009. He followed it with a four–track EP in 2010 entitled False Lights from the Land, featuring two originals and two covers. In the spring of 2012, Hawley released Standing at the Sky's Edge, an aggressive, two–guitar, bass, drums — and rocket noises — rock & roll album, which stood in stark contrast to his previous two full–lengths.
♣•♦   After a couple of short tours, Hawley retreated to Sheffield. He eventually left Mute and signed an American deal with Warner Bros. His first effort for the label was Hollow Meadows. It was recorded at the Yellow Arch Studios and co–produced with longtime guitarist Shez Sheridan and Colin Elliot. Featuring guest appearances from Martin Simpson, Jarvis Cocker, and Nancy Kerr, it was released on September 11, 2015.
_____________________________________________________________