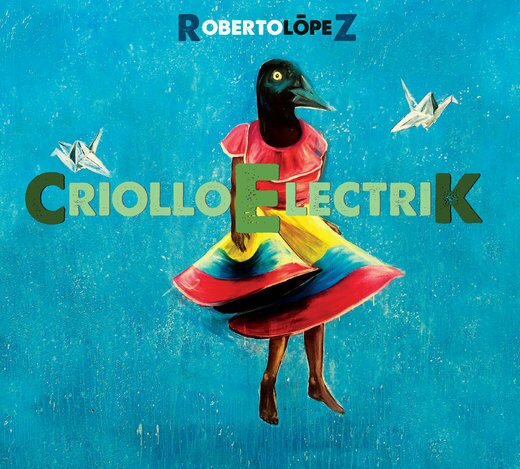 »•  Picture a tussle~haired kid in a hidden record store in Bogota, seeking the roots of punk, reggae, metal, anything with the magic dream instrument: the electric guitar.
»•  Now Roberto López speaks Colombian Spanish and Quebecois French and Montreal English and the guy’s so mixed up he can’t spell in any language — which is how we got Criollo Electrik, the new soundtrack for your trans~national world.

© Roberto López. Author: Felix Renaud
Location: Montreal, Québec, Canada
Genre: Afro~Colombian Soul / Nuevo Afro~Latino / Big Band Porro
Album release: March 3rd, 2017
Record Label:
Duration:     39:44
Tracks:
01. María La Baja     3:02
02. Oye Candelaria     3:37
03. Cumbiero     3:35
04. Calentao     3:26
05. Las Aguas     3:25
06. Agüé     2:39
07. Libertad     3:14
08. Chambacú     3:11
09. Hay Pescao?     3:09
10. Baila     3:27
11. Guayabita     3:22
12. Quiebra~Canto     3:37
Credits:
»•  Roberto López — Guitars, bass, keys, tambora and llamador
»•  Momo Soro — Drums
»•  Vovô Saramanda — Percussions
»•  Vocals by Adan de Dios, Emelina Reyes Salgado “la Burgos” and Teresa Reyes Salgado “la Mella”
»•  Produced by Ivan Duran
»•  Co~produced and recorded by Roberto López at Curura Musique Studios
»•  Additional recording at Casa de la Cultura Graciela Salgado, San Basilio de Palenque, Colombia
»•  Mixed by Ivan Duran at Stonetree Studios
»•  Mastered by Ryan Morey at Ryan Morey Mastering
»•  Art Direction Roberto López and Ivan Duran
»•  Graphic Design MID51
»•  Cover Painting by Javier Almirón — Atrapasueños Relato Urbano
»•  Album photography by David Covo Camacho
»•  Additional photography by Kaveh Nabatian
»•  All songs written and arranged by Roberto López
»•  Additional arrangements by Ivan Duran
»•  All songs published by Stonetree Music, all rights reserved
»•  This project is funded in part by FACTOR, the Government of Canada and Canada’s private radio broadcasters.
»•  This recording was made possible through the assistance of the Music Section of the Canada Council for the Arts.
Description:
»•  It’s not up there in the head. It’s down there, in the heart, or lower in the gut, or lower still, that’s it, now you’re getting the idea. If music is a language, forget Rock en Español, Lopez has conjured up his own Esperanto — a deconstruction of influence to create something absolutely new. He’s not interested in tumbling down any statues, he’s building a new one right next to them.
»•  Cause this isn’t fusion, nothing so vainglorious as that. This is sunlight filtering through Colombian palms making patterns on some sticky Canadian sugar shack where the wolves are at the door and you gotta run like hell. Roberto Lopez is a bell~ringing dream of tomorrow, but still with the stains of Bogotà bus floors on his Doc Martens, and some heavy metal leather vested hands~up sweaty mess screaming his way to being a hero. You want to mix it up more? Get a Brazilian to play your Colombian rhythms, an African to be your rock drummer. And just when you think you’ve pinned down that image, here comes some long~limbed Nigerian princess shaking her disco booty at you and wagging her finger cause you’ve been naughty, you’ve been using that fusion word, you been keeping it all in your head like some marble statue when the universe is contained down there, and we don’t have any more time for that bullshit. Clik play now!
Influenced: Lucho Bermudez, Pacho Galan, José Barros, Pablo Flórez, Justo Almario, Hector Martignon, Edy Martinez, Joe Armando, Toño Arnedo, Tico Arnedo, Joe Madrid, Rafael Leal, Armando Manrique, Oscar Acevedo, William Maestre, Pablo Mayor, Puerto Candelaria, Francisco Zumaqué, Memo Acevedo, Teto Ocampo, Armando Escobar, Toto la Momposina, los Gaiteros de San Jacinto, Gentil Montaña ..

© Montreal, Québec, Roberto López. Photo credit: Kaveh Nabatian
Review
By World Music Report —  Mar 5, 2017
»•  Remember those big, beautiful stereo receivers from the 1970s? Well, some of them had a mic input in that shiny metal faceplate. When Roberto López was a teenager growing up in Bogotá, he would plug his black Les Paul knockoff guitar into his parents stereo and crank it up until he got that sweet distortion that he was after. Much to his parents’ dismay of course.
»•  When the Montreal~based guitarist set out to make his new album, Criollo Electrik, he went searching for that childhood sound. “I was a big fan of the boogaloo growing up – you know, this mix of Motown, soul, and Latin grooves”, López explains. “With this album I wanted to come back to my roots, to that kid putting his dad’s stereo into overdrive. ”
»•  The project may have been inspired by nostalgia but the finished product is perhaps Lopez’ most forward~thinking music to date. Aptly named, Criollo Electrik is an electrified — and electrifying — creole, a musical language of mixed ancestry. With a Brazilian percussionist and an Ivorian drummer playing percussive parts written by a Colombian, it seems only appropriate that this electric creole was recorded in the bilingual melting pot of Montreal. The record is infused with the flavours of champeta, the Colombian take on African music which spread through the picó, or the Colombian sound system. Lesser known than its Jamaican counterpart — but just as vital to street culture and a link to heritage — the brightly painted picos were at the heart of working class parties where, in the 70s, the DJs spun rare records from the Caribbean along with soukous, Afrobeat, and highlife LPs imported from West Africa.
»•  Roberto López played his demos to innovative Belizean producer Iván Durán who jumped on board to helm the project, on the condition that he could release the album on his Stonetree label. Durán’s tasteful treatment envelops the record in fuzzy distortion, retro reverb (circa 1966), and a barrage of rolling drums. If the album feels deliciously unrushed it may be because Durán insisted on manning the sessions with players who had the restraint necessary to deepen that elusive, intangible “pocket” where the urge to move is born. After his acclaimed large ensemble albums with the Afro~Colombian Jazz Orchestra, López was also encouraged to scale down his band and simplifying things. “If I went for a more complex chord voicing, Iván would protest: ‘Too jazzy!’”, Lopez says with a laugh.
»•  The resulting collaboration is an infectious collection of tropical dance~floor fillers. Though the roots may be specific to the Colombian Caribbean coast, Criollo Electrik is cosmopolitan music that effortlessly will make itself at home in big city clubs from Miami to Madrid. “Maria la Baja” seductively draws you in with its big, bold, hypnotic drum sounds; sunny “Hay Pescao” channels Thomas Mapfumo‘s chimurenga music with its high, driving guitar syncopations; “Candelaria” is a piece of strutting Afro~funk while “Cumbiero” is a lazy gallop into a pleasant haze of distortion. Urgent and yearning guitar lines soar over interlocking percussive patterns, anchored by Motown~inspired bass lines. López is not headed for any big, climactic chorus. On the contrary, he often inserts a breath of a few bars into the songs — a break just long enough for you to realize that you were under the spell — confident that he will pull you back in, two bars from now.
»•  https://worldmusicreport.com/
Bandcamp: https://criolloelectrik.bandcamp.com/album/criollo-electrik
Website: http://robertolopez.ca/
Twitter: https://twitter.com/lopezmusique
Facebook: https://www.facebook.com/RobertoLopezMusica
YouTube: https://www.youtube.com/user/robertolopezpro
»•»•»•»•»•»•»•»•»•»•»•»•»•»•»•»•»•»•»•»•»•»•»•»•»•»•»•»•»•