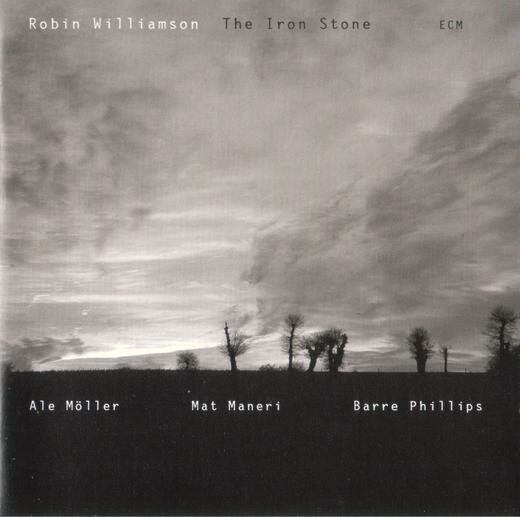 Picture: Korks in Bondgate is having some very interesting Monday music nights this Spring. Robin Williamson and John Renbourn are world class performers with over 40 years of work behind them. Tonight was a very cosy, friendly affair and the last thing I wanted to do was disrupt things by moving around taking photographs. So I just took a couple from where I was sitting with no flash and the ISO setting as high as it would go. Stories and music were both of the very best. For me, Robin Williamson singing Dylan’s “Absolutely Sweet Marie” was a revelation. Author: Sam Saunders
Review by Thom Jurek, Allmusic.com
•   The British folk singer Robin Williamson collaborates with the Swedish folk musician Ale Moller and two U.S. jazz musicians, the violinist Mat Maneri and the bassist Barre Phillips, in this set, which features improvisations on the works of poets as varied as Walt Whitman, Sir Walter Raleigh, and William Blake. Also included are reworkings of folk tunes such as “Sir Patrick Spens” and Williamson’s own “The Iron Stone,” as well as abstract musical meditations such as “There Is a Music” and “To God in God's Absence.”
•   At the age of 63, poet, songwriter, composer and visionary Robin Williamson shows no signs of slowing down on The Iron Stone, his third set of recordings for Manfred Eicher’s ECM label. The title, of course, comes from the song of the same name that Williamson and the Incredible String Band first recorded on the Big Huge album in 1969. “The Iron Stone” appears here with another of the ISB’s classic tracks, “The Yellow Snake” from Big Huge’s 1968 predecessor, Wee Tam. But this is no reinterpretation of ISB tunes, nor is it a simple examination of Williamson’s career past. If anything, The Iron Stone is a brave yet logical next step in the direction he has relentlessly pursued with ECM. Whereas his first disc for the label, 2001’s The Seed–At–Zero, explored the work of Dylan Thomas and other Welsh writers in songs and improvisational poem songs that he performed solo, the second set, 2002’s Skirting the River Road used William Blake and Walt Whitman as its muses, and employed the talents of Ale Möller, Mat Maneri, and Barre Phillips, as well as Paul Dunmall. Möller, Maneri and Phillips return here; and Williamson and Möller play all manner of flutes, concertinas, Mohan Vina, harps, whistles, jaw harps, and drums between them. The feeling of continuity is here, as Williamson and his musical collaborators set music to the works of Sir Walter Raleigh, Ralph Waldo Emerson, Thomas, Wyatt and John Clare to music that is as much of an improvisational nature as it is composed. In addition, there are songs and poems by Williamson, which are realized by his association with this fine trio. Is this folk music? Yes and no. It is organic music, played upon folk instruments, and much of the source material comes from the lineage of tradition carried on from one generation to another.
•   That said, the spirit of adventure exists here more than it does on the previous two outings. Williamson has grown increasingly comfortable with the postmodern jazz idiom and its reliance on close listening, dynamic, and the uses of space and texture — which, in its way, derives from poetry itself — that is on display here in spades. The tenderness and gentleness of the songwriter’s heart are present here, along with his wondrous and witty sense of humor, that comes as much from sound as it does the use of centuries of language all piled on top of one another Whether it be traditional songs such as “Sir Patrick’s Spens,”  Turlough O’Carolan’s “Loftus Jones,” or the pastoral, wicked humor of “Political Lies,” by the songwriter, the sense of centering around the music’s thematic idea is paramount. When the sense of adventure is high, as it is on “Emerson’s Baccus,” with its Eastern motif and striated vocals, or Williamson’s own “There Is a Music,” with its dissonance, finds certain warm figures and skeletal chordal ideas at the core as the ensemble plays around and through them, ever keeping the idea and its skeletal frame in the ear of the listener. The two ISB tunes are done here very differently, yet contain all their original strangeness and charm as well as humor. The Iron Stone is the farthest afield of the ECM trilogy, but it is also the most focused and collaborative. Phillips and Maneri, who are improvisers by their natures and their chosen fields, and Möller, who began as a “folk” musician, have all been stretched by their experience with Williamson, who has added much depth and dimension to his already staggering musical background. Together they have extended both the languages of folk and improvisational musics, and in doing so have created a work at once immediate and timeless, full of warmth, wonder and vision. It’s hard to imagine any but the most cynical or puritanical listeners not being delighted by the wide array of colors, tones and textures — both linguistic and musical – on offer here. The Iron Stone is the real freak folk brought back to the hearthstone (and perhaps it feels this way in part because it was recorded in an 18th century mill house). It’s brilliant and full of soul.
Website: http://www.pigswhiskermusic.co.uk/
MySpace: https://myspace.com/rwfans