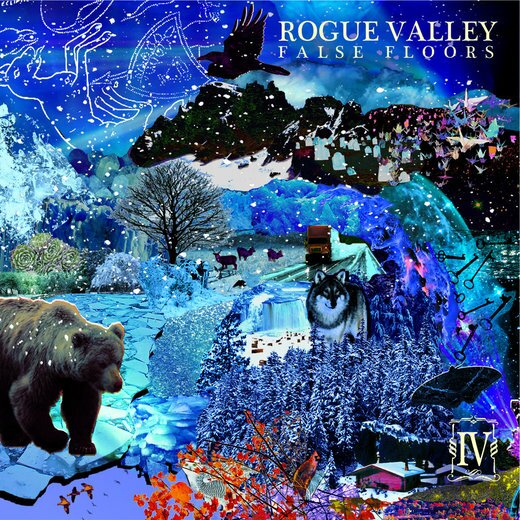 Rogue Valley — False Floors (April 1, 2011)
•   The melodic chill of a barren tundra in the midst of a harsh winter is eased by the warmth radiating from an underground cavern where memories and might–have–beens huddle together, working like flint and tinder.
•   Rogue Valley is an Americana–Rock band from Minneapolis, Minnesota. In one years time, they wrote, recorded, and released four full length albums, one with each season. The albums and songs therein come together to tell a story of love and loss; of wanderlust and consequence and of how relationships change over time and distance. Live, Rogue Valley performs with 4–6 pieces.

Album Notes
•   False Floors is the culmination of the Seasons Project from Minnesota–based band Rogue Valley. Over the course of one seasonal year — from Spring 2010 to the end of Winter 2011, Rogue Valley released one full length album for each season. False Floors draws from melodic and lyrical content from the previous releases, progressing and concluding the story–line within the songs and albums. The conclusion here, however, is both the end of a cycle, and the notion that it will repeat; that despite the natural decay of the living, and dulling of the vibrant, what has come before will come again independent of outside influence.
CD Baby: http://www.cdbaby.com/cd/roguevalley4
Website: http://lostinroguevalley.com/
Twitter: https://twitter.com/roguevalleyband
Tumblr: http://roguevalleyband.tumblr.com/
Bandcamp: http://roguevalley.bandcamp.com/album/false-floors