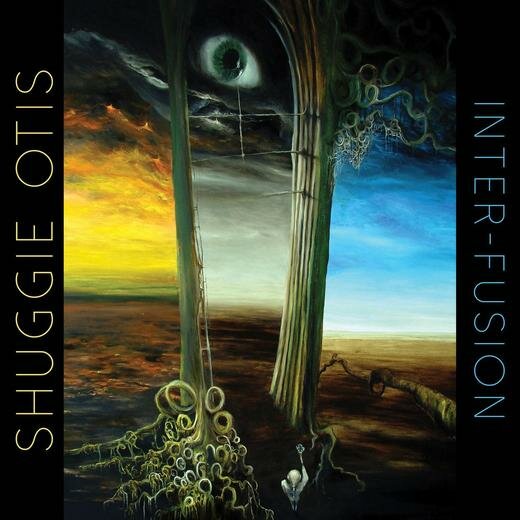 ★       Features drummer Carmine Appice & bassist Tony Franklin! Though most known for his soulful songwriting and gentle croon as heard on blockbuster hits such as “Strawberry Letter 23” and “Inspiration Information,” Shuggie Otis has long been held as one of the most innovative and tasteful guitarists to ever pick up the 6~strings, the “heir to Hendrix” as he is often called. A guitar~playing prodigy from an early age, Shuggie performed on stage and in the studio alongside his legendary father, bluesman Johnny Otis.
★       Now, Shuggie has a new project that showcases just how mindblowing he can be on the pearly frets of his gorgeous maroon Gibson SG, an adventurous new fusion rock project called Inter~Fusion. The album consists of mostly instrumental tracks that groove and weave, taking unexpected turns in surprising directions but all anchored by one of the finest rhythm sections imaginable featuring drummer Carmine Appice (of Vanilla Fudge and Beck, Bogert & Appice) and bass player Tony Franklin (of The Firm and Roy Harper). In addition, keyboardist Kyle Hamood (of local L.A. rockers Them Guns) steps in as both a musician and producer of the album bringing the absolute best performances possible out of each player.
Born: November 30, 1953
Location: Los Angeles, CA, U.S.A.
Genre: R&B/Soul
Styles: Guitar Virtuoso, Instrumental Rock, Modern Electric Blues
Recording Location: Rancho Relaxo Recording, Canoga Park; SIR, Los Angeles; The Fritz Studios, Redondo Beach
Album release: April 20, 2018
Record Label: Cleopatra Records
Duration:     41.42
Tracks:
1 Aphelion     4:28
2 Get a Grip     4:59
3 Ice Cold Daydream     3:54
4 Interlude     5:05
5 Woman     4:35
6 Sweet Surrender     5:43
7 Clear Power     8:02
8 V8     4:55
Written by:
★    Kyle Hamood     1, 7
★    Tony Franklin     2, 6
★      Shuggie Otis     3
★    Carmine Appice / Tony Franklin / Kyle Hamood / Shuggie Otis     4
★    Carmine Appice     5, 8
Credits:
★       Carmine Appice Composer, Drums
★       Jennifer Calderon Graphic Design
★       Fernando Cordero Photography
★       Vicente Cordero Photography
★       Tony Franklin Bass, Composer
★       Sergio Galindo Engineer
★       Kyle Hamood Composer, Engineer, Keyboards, Producer
★       Aaron Kaplan Guitar, Mixing
★       Lukasz Kasperczyk Cover Art
★       Shuggie Otis Composer, Guitar, Primary Artist, Vocals
★       Jesse Stewart Engineer
Description (continued):
•★•√     Reflecting on the recording process, Appice enthuses “This was one of the wildest sessions I’ve ever done in my career!” while Franklin had high praise for Otis, saying “Shuggie loved to jam, and was very open to everyone’s input. He was not afraid to experiment and try new directions and sounds. I think the music sounds very fresh and alive.” Additionally, Hamood summed up his thoughts on this unique experience saying “Watching the songs come together over such a short period of time, and the diversity that each band member brought to the overall sound and vibe was truly magical. It was an honor to work and create with such a talented group of musicians.”
•★•√     In a behind~the~scenes promotional video, shot by director Vicente Cordero, Shuggie likewise gushes over the project and his fellow collaborators saying in conversation with Cleopatra owner Brian Perera, “Wow! Did you know it was going to be this good? I know how good it is because I’m in the group. But you’ve seen a little bit of it, and I think you know, you feel the excitement, you hear how good these guys are. And they’re really serious, not just some jive cats!”
AllMusic Review by Thom Jurek; Score: ***½
•★•√     Though he released Live in Williamsburg back in 2014, it has been 44 years since guitar wizard Shuggie Otis released a studio album. Coming of age first with his father Johnny’s wonderfully raucous R&B band and playing on sessions by T~Bone Walker and Big Joe Turner, Otis gained first notice from rock fans for his starring role on Kooper Session: Super Session, Vol. 2). He released three fine studio albums under his own name between 1970 and 1974 including the classic Inspiration Information. (Live in Williamsburg was cut during a global tour celebrating its 40th anniversary reissue that included a bonus disc of odds~and~sods material recorded between 1975 and 2000 titled Wings of Love.)
•★•√     Here Otis leads a quintet that includes veteran rockers Carmine Appice (Vanilla Fudge, Beck, Bogert & Appice) and bassist Tony Franklin (the Firm, Roy Harper), keyboardist/producer Kyle Hamood (Them Guns), and guitarist Aaron Kaplan. According to Otis, this is a “fusion rock” project (a loose mix of funk, blues, soul, and rock & roll). Mostly instrumental, it sounds like a loose jam session by highly sympathetic players who frame Otis’ still dazzling, soulful playing. Opener “Aphelion” is as minor~key blues waltz introduced by an eerie electric piano. Otis touches on parts of two different melodies and bridges them with his solo. Three quarters of the way through, Appice pushes the band into a tempo change and ratchets up the tension. “Get a Grip” is heavier. Its funky backbeat, spiky wah~ah chording, and swirling organ pave the way for Otis and Franklin to trade riffs before the former adds weighty, tasty fills and a break before the tune winds its way out to hard rock. “Ice Cold Daydream” features the twin propulsive forces of a whomping bassline and Appice’s breakbeats. Otis’ thin, wispy voice sounds almost the same as it did in 1974. This is funky rock at its best, complete with a Hendrix~ian guitar freakout. The grooves are even fatter in the nasty funk that is “Woman.” Its guitar interplay is seamless despite raw~toned distortion with syncopated snare and kick drum breaks and rumbling bass in massive vamps. The ELP~esque keyboard solo in the middle eight gives the entire tune a schizophrenic quality. It paves the way for “Sweet Surrender,” an outright prog rock jam that will resonate most with guitar freaks. The eight~minute “Clear Powder” is the set’s longest offering, an aural montage of biting funk that gives way to the wide~open, Deep Purple~inspired highway rock that is “V8.” (Otis’ unique phrasing, however, adds both heft and soul that would never occur to Richie Blackmore.)
•★•√     Inter~Fusion is a hip little record. While it doesn’t reach the heights of Otis’ earlier work, it does provide a healthy dose of the unique talent he brought to the game in the first place. — AMG
•★•√•★•√•★•√•★•√•★•√•★•√•★•√•★•√•★•√•★•√•★•√•★•√•★•√•★•√•★•√•★•