"shot in black-and-white and running a haunting, emotion-drenched 75 minutes, [inni is] as pure an experience of the cinema as i've had."   Justin Chang, Variety
'inni' is either the first-ever sigur rós live album, or second live film (and follow up to 2007's acclaimed iceland tour film heima). in fact, it is both: a 75-minute film and 105-minute double live album of the band captured in full flow at the close of their last tour in november 2008, here housed within one single fat package.
filmed at alexandra palace over two nights by director vincent morisset (arcade fire's 'miroir noir'), the movie 'inni' could best be described as the anti-'heima'. whereas that film took a band about whom the world knew little, and placed them in the cultural, social and geographical context of their homeland, (with winning and humanising results); the new film strips away everything save the raw performance of the four musicians themselves. where 'heima' was widescreen and open, 'inni' is close and single focussed.
this is intentional. for while 'heima' was successful at "explaining" sigur rós, it was less so at conveying what it feels like to actually watch sigur rós play. that is the job of 'inni'. in order to accomplish this goal, morisset has taken his time and employed a number of different analogue post-production techniques to create an emotional understanding of being in the room with the band and going 'inside' the music. ("inni" literally means "inside").
unlike many concerts, watching sigur rós is seldom a communal experience; it is instead intensely personal. by almost entirely removing awareness of the crowd and any sense of place, morisset brings you closer than ever to the players, using multiple camera angles to reveal in sometimes minute close up the concentration and effort involved in delivering such a powerful rock show.
originally filmed on hd digital, 'inni' was first transferred to 16mm film and then projected and re-filmed once, sometimes through glass and other objects to give a strong impressionistic look, a feat accomplished with the help of godspeed you! black emperor visual collaborator karl lemieux. the film was then meticulously pieced together by 'heima' editor nick fenton, who chose to break up the flow with unexplained archive footage, including interview and concert material from before the band's exposure to the wider world at the tail end of the last century.
it's worth mentioning also that the film has only one song in common with 'heima' (the closing 'popplagið') and that it draws for the most part on the darker end of the band's material. the double live album by contrast, covers the entire sigur rós spectrum over its hour-and-three-quarters, the songs played in the same order as on the night. mixed by sigur rós house engineer birgir jon birgisson, 'inni', the live album, stands as the definitive sigur rós live recording.
the performance captures the band playing as a stripped down four-piece for the first time since they were joined by string section amiina at the start of the decade. this fundamental 'boiling down' makes 'inni' a more forceful and primal proposition, much at odds with the popular misconception of the band as purveyors of instant emotional heft for film-makers in need.
the album features 15 tracks, with songs taken from all five sigur rós studio albums. there is also the bonus of an unreleased studio track in the form of 'lúppulagið', which is used both over the credits of the film and as the final non-live track on the album. the dvd/blu-ray, meanwhile, also includes four extra songs from the night. 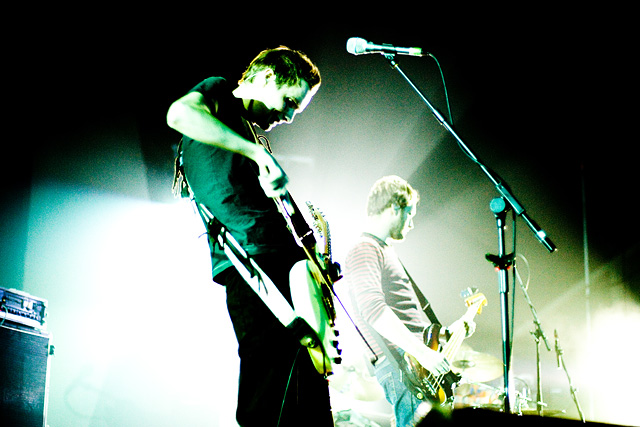 *Double play DVD & Blu Ray disc with bonus 2CD album* For Sigur Ros’s first ‘proper’ live album, it makes sense that they’d pull out all the stops, and that they do with a near two hour package for your troubles. Sharing only a single song with the ‘Heima’ live movie, this should show the world why fans get just that little bit crazy about Sigur Ros performances. When the band play it can be like a religious experience for many, and the passionate delivery shown here provides you with a good clue as to why. Gigantic crowdpleasers like ‘Hoppipolla’ sound perfect sitting alongside the more contemplative ambience of ‘E-Bow’ and the flow is so cinematic you feel like you’re being physically yanked into their euphoric soundworld even without the visual accompaniment. Just to seal the deal the band have included exclusive studio track ‘Luppulagio’ as a bonus.
TRACKLISTING:
CD1:
01. Svefn-g-englar
02. Glósóli
03. Ný batterí
04. Fljótavík
05. Vid spilum endalaust
06. Hoppípolla
07. Med blódnasir
08. Inní mér syngur vitleysingur
09. E-Bow
CD2:
01. Sæglópur
02. Festival
03. Hafsól
04. All Alright
05. Popplagid
06. Lúppulagid (bonus track)
'INNI' FILM TRACK LIST:
01. Ny Batterí
02. Svefn-g-englar
03. Fljótavík
04. Inní mér syngur vitleysingur
05. Sæglópur
06. Festival
07. E-Bow
08. Popplagid
09. Lúppulagid
'INNI' FILM BONUS TRACKS:
01. Glósóli
02. Við spilum endalaus
03. Hafssól
04. All alright

Wikipedia:
On August 11, 2011 Sigur Rós' official website unveiled a trailer for a project called Inni. This is a DVD and double CD of the band's live performances in London, and was directed by Vincent Morisset. It was screened at the Venice Film Festival, and will see official release in November 2011. At the 2011 Festival in September, members of Sigur Rós took questions from the audience. During this, Orri Páll Dýrason confirmed that they would be touring next year (2012) and also that a new album was in the making.
On September 16, the Inni album and live video became available to pre-order from the band's site in a variety of formats, additionally the band made the video for the song "Festival" available to watch online, as well as offering a free download of the audio for the song performance.
On 3 November 2011 following the UK premiere of "Inni" at the British Film Institute in London, the band members participated in a Q&A session during which Georg promised that 2012 would be a "very busy" year for Sigur Ros. The band hinted at a new album and tour in the second half of 2012. The Q&A session was curtailed when a stage light began to emit smoke and the room was evacuated. 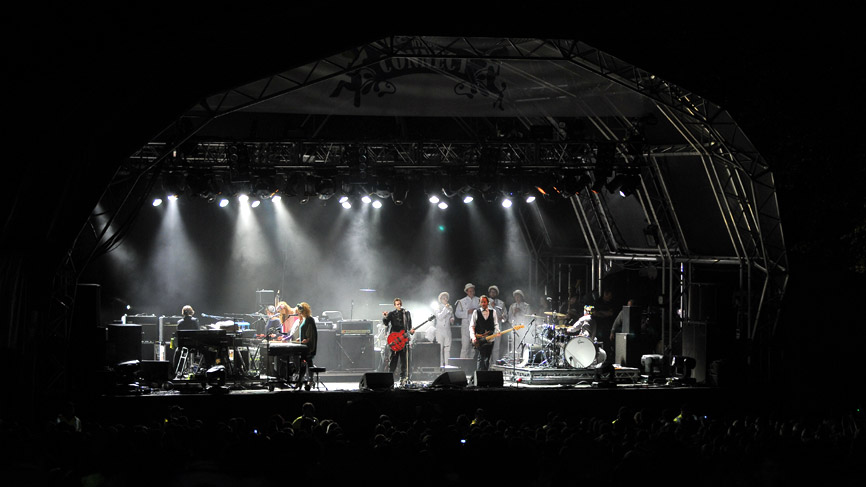