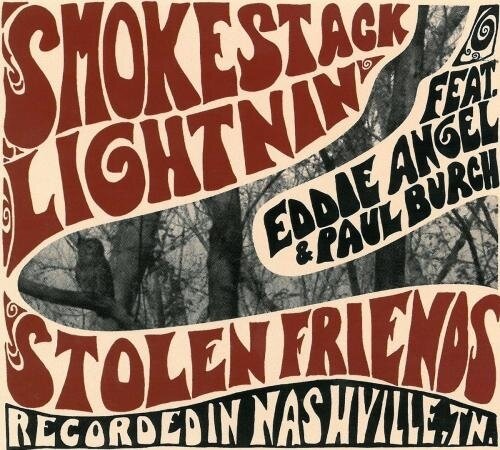 Smokestack Lightnin’ — Stolen Friends
Location: Nürnberg, Germany
Album release: February the 17th 2013
Recorded in Nashville,TN
Record Label: Cargo Records
Duration:     35:05
Tracks:
01. Swamp County     2:55
02. Groupy Girl     3:29
03. Wandering Soul     4:09
04. What Have I Got of My Own      3:37
05. U.F.O.     3:03
06. Everglades     3:28
07. Gone Gone Gone     2:47
08. Long Line Rider     3:31
09. Wondrous Place     3:30
10. Can’t Get Away     4:36
Ξ   All songs feat. Eddie Angel & Paul Burch
Cast:
Ξ   Bernie Batke Lead Vocals, Bass
Ξ   Michael Kargel Drums
Ξ   Axel Brückner Guitars, Keys, Voc
Ξ   André Langer Guitars, Mandoline, Voc
•   Smokestack Lightnin' release their 6th studio album on February the 17th 2013 via Witchcraft International/Rodec, distributed through Cargo Records. Recorded in Nashville, TN.
•   Recorded in surprise, surprise! Nashville, Tennessee by the last remaining Nashville icon Eddie Angel and produced by the legendary Paul Burch, the Nürnberg–based band presents- an ambitious but shot from the hip-kind of album that will convince all friends of R&B, classic Rock‘n’Roll and Alternative Country.
•   In their unique way Smokestack Lightnin' relate stories of murder, despair and many other obscure adventures from the swamp.
•   All songs on “Stolen Friends” are mostly unknown cover-versions from the 60’s, chosen with a keen eye for detail from the bands inexhaustible pool. The material is inspired by numerous cruises through record-shops across the USA where the four picked up more 7, 10 and 12 inches than any airline would allow for luggage regulations.
•   Eddie Angel is also known as the guitarist for Los Straitjackets and a true legend. •   Long before the R’n’R  revival-generation had their first day at school, Eddie lived his passion for British Beat headed by the Beatles, instrumental music of the 50’s and 60’s and classic Rock’n’Roll.
•   In the slipstream of those heroes from the 50’s to whom labels like sun records owe their heyday Eddie developed his exceptional talent as a guitarist, songwriter and pioneer of a sound that inspires and intrigues legions of beatniks, rockabillys, punkrockers and all other fans of the old school to the day.
•   The friendship between Smokestack Lightnin’ and Eddie Angel is long standing being his backing band for years on his solo tours through Europe. Therefore a co-operation for a release comes as no surprise.
•   The involvement of producer/songwriter/multi-instrumentalist and “Lambchop” ex-drummer Paul Burch is a different story. With his many solo-albums, he is the bands favorite partner and has committed himself spontaneously to producing “Stolen Friends”.
•   Surely a sign for the quality of Smokestack Lightnin’, celebrating their 20th jubilee in the near future looking back on an eventful career which, apart from the friendship and team work with Bela B (Die Ärzte), their chart success with the cover version of “The Unknown Stuntman”  theme song to the TV-series “The Fall Guy”  countless tours all over the globe, living the dream, love for Alternative Country, R&B and 60’s Rock’n’Roll is proof of the bands authenticity.
•   To lift a single from “Stolen Friends” the band pre-release the Everly Brothers’ “Gone Gone Gone” as a download version. The song was also tried out by Robert Plant, but unfortunately didn’t get much attention from a wider audience. A shame, because it’s simply a hit, now brought back to life in a smashing performance by Smokestack Lightnin’.
Kontakt Booking / Promotion: Rodrec, Barbara Wetzer
t: +49 (0) 40-31797396
Website: http://www.smokestacklightnin.de/
•   www.rodrec.com
•   www.witchcraft-international.de
YouTube: http://www.youtube.com/watch?v=q3uAER2efzs
______________________________________________________________