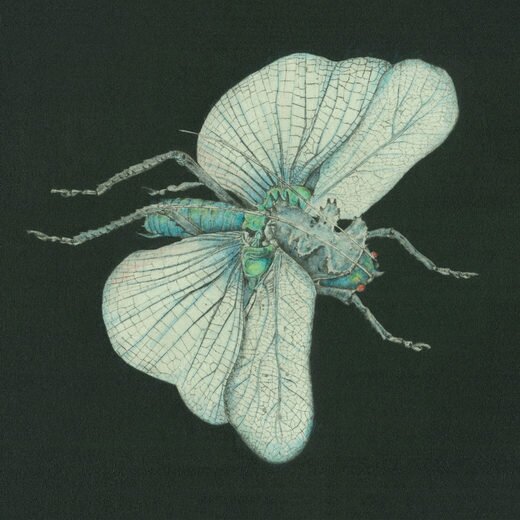 Boomkat Product Review:
?♣?         Susanna Wallumrød commits her fourth full suite of cover versions with Go Dig My Grave for her home~baked label.
?♣?         Working again with Giovanna Pessi, who assisted on her first set If Grief Could Wait, as well as invaluable input from longtime partner/production spar Helge Sten (Deathprod), Susanna demonstrates a rare versatility with singular takes on songs by everyone from Henry Purcell to Joy Division and Lou Reed (including a bonus on CD not found on the vinyl), and with particularly spellbinding results in the latter two of those names.
?♣?         If we try to pick out why we’re more attracted to the ‘pop’ songs, as opposed to the traditionals such as The Three Ravens or The Willow Song, that may come down to the fact their simplicity seems almost overbearing when rendered in such high~fidelity — almost like receiving a folk performance in a white cube gallery or sterile space, as opposed a barn or pub backroom — yet, conversely, the recordings of Joy Division’s Wilderness and Lou Reed’s Perfect Day become devastating thru their clarity of their conveyance, aided in no small part by feral fiddles and accordion in the former, and embroidered with kalimba and fiddle on the latter.
?♣?         So yeh, some work, some don’t. But when they do, christ, she’s good.
?♣?     https://boomkat.com/
Description 1:
Written by Alex Gallacher 2 November, 2017
♦δ♦       If I said that Norwegian artist Susanna had previously collaborated with the likes of Jenny Hval and Bonnie ‘Prince’ Billy then free~thinking experimentation would possibly spring to mind. ♦δ♦       That said, she’s no stranger to creating her own intellectual headspace as she so ably demonstrated on her 2016 first self~produced album, Triangle. Her lineup included experimental musicians including Anja Lauvdal of Skadedy — a band on the Hubro roster who describe them as a Norwegian democratic-anarchistic band. She described the album as “soul music for lost souls” and I’m guessing she left a lot of people wondering how she would follow up.
♦δ♦       We don’t have long to wait to find out as the answer comes in the form of her 12th album ‘Go Dig My Grave’,  due out February 9th via her own label SusannaSonata. If the title track and first single (out now) is anything to gauge it by then the surprise is going to be a very interesting one.  Go Dig My Grave is a traditional folk song previously sung by Jean Ritchie. Speaking of how she discovered this Susanna explains: “During my trips to the States over the past years I have picked various Folkways records (which is an incredible label) and I have been able to discover some old songs. The label presents a broad variety of American folk songs and among my favourites are the Jean Ritchie albums, and her version of ‘Go Dig My Grave’. When I heard the song I knew immediately that I wanted to sing it, I was struck by the presence in her singing and the tragic story to the song. It took a while to make my own version of it though, to find the right way to present it.”
♦δ♦       First single from Norwegian artist Susanna’s upcoming album ‘Go Dig My Grave’ feat. Giovanna Pessi, Ida Hidle & Tuva Syvertsen.
♦δ♦       ‘Go Dig My Grave’ is a unique project between Susanna, Swiss baroque harp player Giovanna Pessi, accordion player Ida Hidleand fiddle player & folk singer Tuva Syvertsen. The quartet have reworked ten eclectic songs from seemingly disparate worlds and brought them together on this album of sympathetic and beautiful interpretations. They lend their talents to traditional English and American folk songs, numbers by Purcell, Elizabeth Cotten, Joy Division and Lou Reed, as well a new composition by Susanna written to a poem from Charles Baudelaire’s once banned ‘Flowers of Evil’.
♦δ♦       Produced by Deathprod and Susanna, ‘Go Dig My Grave’ was recorded at the world class Rainbow Studio in Oslo and is released on Susanna’s own label SusannaSonata. It is one of several extensive projects for Susanna in 2017, among them a notable work commissioned for one of Norway’s most important jazz festivals, Vossa Jazz. An hour~long piece inspired by the surreal pictures of the Dutch 15th century painter Hieronymus Bosch was premiered at the festival in April, and Susanna’s brand~new band, The Brotherhood of Our Lady, continues to play live in Norway through the fall of 2017.   ♦δ♦       http://www.folkradio.co.uk/
Description 2:
•★•       On the intense “Go Dig My Grave”, Susanna proves once again to be an unique interpreter of songs.
By Andrew Hannah / 01 NOVEMBER 2017, 11:15 GMT
•★•       The first track to be shared online is the album’s title track, “Go Dig My Grave”, a traditional folk previously sung by Jean Ritchie.   ♦δ♦       https://www.thelineofbestfit.com/ ♦δ♦
Also review:
Aimee Armstrong, 09 Feb, 2018 / Rating: 8/10
♦δ♦       Regardless of its leanings towards the descents into gloom, Go Dig My Grave retains a gorgeous edge, Susanna’s vocals are alluring as ever, on one of her most unique projects to date.
♦δ♦       https://www.thefourohfive.com/music/review/review-susanna-makes-a-classic-set-of-songs-truly-her-own-on-go-dig-my-grave-151
Personnel:
•★•       Susanna — vocals
•★•       Giovanna Pessi — baroque harp
•★•       Ida Løvli Hidle — accordion
•★•       Tuva Livsdatter Syvertsen — fiddle
?♣?     Recorded by Jan Erik Kongshaug at Rainbow Studio Oslo
?♣?     Mixed by Jan Erik Kongshaug with Helge Sten and Susanna at Rainbow Studio.
?♣?     Produced by Deathprod and Susanna
?♣?     Mastered by Helge Sten at Audio Virus Lab.
?♣?     Cover is an artwork by Arne Bendik Sjur, used with the artist’s permission.
Facebook: https://www.facebook.com/susannamagical
Website: http://susannasonata.com/
Website: http://susannamagical.com/
Soundcloud: https://soundcloud.com/susannawallumroed/susanna-go-dig-my-grave-single-official
♦δ♦δ♦δ♦δ♦δ♦δ♦δ♦δ♦δ♦δ♦δ♦δ♦δ♦δ♦δ♦δ♦δ♦δ♦δ♦δ♦δ♦δ♦δ♦δ♦δ♦δ♦δ♦δ♦δ♦δ♦δ♦δ♦δ♦δ♦