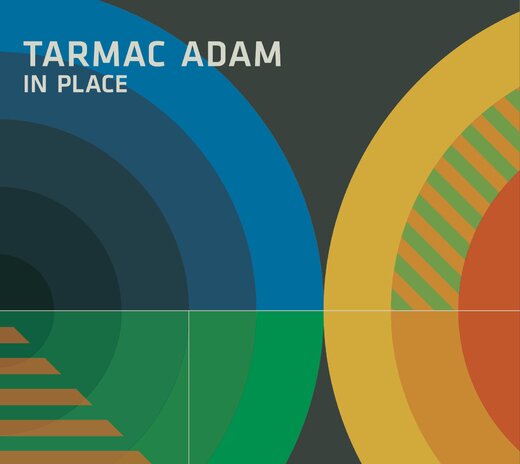 © Steve Paix of Tarmac Adam on keyboards at The Saint in Asbury Park, New Jersey on May 23, 2013. Author LH Collins
Review
Ψ   Australia’s Tarmac Adam returns with In Place, an album hewn from road–worn meditation, a beautiful album of openhearted, stoic affirmation. Once again featuring Crowded House bassist Nick Seymour, Tarmac Adam will release In Place on October 2, 2015.
Ψ   After the inward–gaze of 2013’s The History Effect, songwriters Matt O’Donnell and Steve Paix, Seymour and drummer Josh Barber, have shifted their focus: In Place reaches out, like the ever expanding circles on the album cover, and attempts the unthinkable — a universal message in these increasingly segmented, fragmented times.
♦   The first track available from In Place is “Walk Tall” and the music video draws inspiration from 1980s video art to create a psychedelic journey through a digital dream. Paix calls it, “A song that wrestles with regret and thoughts of what could have been, exhorting us to ‘rise above it all’, leaving behind comparisons to others and being true to ourselves.” (excerpt)
Ψ   http://thelowdownunder.com/2015/08/21/tarmac-adam-return-with-new-album-in-place-new-single-walk-tall/
Review
By Lee Zimmerman, October 13, 2015, Score: ********
Ψ   It’s never easy being part of a spin–off band, especially when the band that you’ve spun off from (A) had enough gold records to fill a good portion of Fort Knox and (B) when the individual who wrote all the material and sang all the songs has opted to seek his or her fortunes elsewhere. It’s a shame really, especially when the former members of that once successful combo have plenty to offer on their own.
Ψ   That’s the case with Tarmac Adam, a quartet from Down Under who count Nick Seymour, the erstwhile bassist from Crowded House, among their number. As was his role in his previous outfit, Seymour plays a rather anonymous role here, neither doing any of the singing or composing any of the band’s songs. Still, as a boost to the group’s marquee appeal, Seymour does at least bring some notoriety to the proceedings, hopefully attracting potential fans through a general curiosity factor if nothing else. And, in fact, that should be enough, because once the curious lean in for even a cursory listen, chances are Tarmac Adam’s music will win them over from that point on.
Ψ   That said, the initial encounter with the band’s new album, In Place, which comes via the downcast “A Town Called Mercy,” though admittedly a lot less auspicious than the Jam similar sounding title “A Town Called Malice,” doesn’t exactly stir up the warm and fuzzy feelings once elicited by Crowded House. Indeed, aside from some momentary atmospheric passages in “Tellingly” and “Nine Lives,” where echoes of “Don’t Dream It’s Over” might be evoked for those who can stretch their imaginations, there’s nothing on the band’s third outing that sounds even vaguely similar to Crowded House’s generally cheery charms. That’s probably a good thing; presumably a musician with a workmanlike–like, forward thinking attitude, it’s unlikely Seymour would want the pressure of being some kind of torchbearer for his former band. That task is best left to Neil and/or Tim Finn who were the prime House movers anyway.
Ψ   Still, comparisons aside, Tarmac Adam have plenty going for them regardless, and after three albums, they’ve deservedly come into their own. Their’s is a decidedly spunky sound, one typified by “Begin To Mend,” “Holding” and “Today’s the Day,” songs that reflect an Aussie knack for creating sprightly melodies that sound like the essence of pure pop. Despite the mellow harmonies and a generally unobtrusive approach, In Place rings with a generally desirable disposition, one that makes repeated hearings an ongoing treat. Of course, whether or not they arise to the vaulted heights attained by Crowded House remains to be seen, and certainly a song that bears an upward gaze like “Walk Tall” may at least put them in contention. However, there’s nothing so immediately hooky as to guarantee them a place in the upper tier of the charts. Suffice it to say however, that Tarmac Adam have clearly shown their ability to make music that’s seductive and sublime. And ought that not be enough?
About the author: Lee Zimmerman
♦   Lee Zimmerman has been an accomplished freelance music writer, reviewer, critic and blogger for the past twenty years. His work has appeared in No Depression, Country Standard Time, CBS Watch Magazine, Goldmine, Blurt, Country Standard Time, Bluegrass Situation, American Songwriter, New Times, Billboard, Keyboard Magazine and Performing Songwriter. Granted, he doesn’t make a lot of money for these endeavors, but the rewards come in the form of a steady influx of CDs and concert tickets, as well as the opportunity to interview many of his rock ‘n’ roll heroes. It also justifies the fact that he can keep a hairstyle best suited to a 25 year old surfer circa 1972. Ψ   http://www.glidemagazine.com/
Website: http://tarmacadam.com.au/
Twitter: https://twitter.com/tarmacadammusic
CD Baby: http://www.cdbaby.com/Artist/TarmacAdam
Facebook: https://www.facebook.com/TarmacAdamMusic
Other press:
Ψ   “Wonderfully warm and vibrant modern pop…” — babysue.com
Ψ   “… the lush arrangements bring to mind Deacon Blue, Aztec Camera and the Smiths to some extent, in that they’re all dreamy and desirable.” — nodepression.com
Ψ   “That’s what differentiates O’Donnell as a songwriter from some of his contemporaries. His words and thoughts are the type that any person can relate to because they touch on emotions that are common to every person…” — BestNewBands.com
_____________________________________________________________ 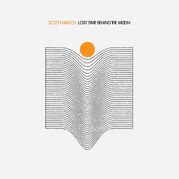