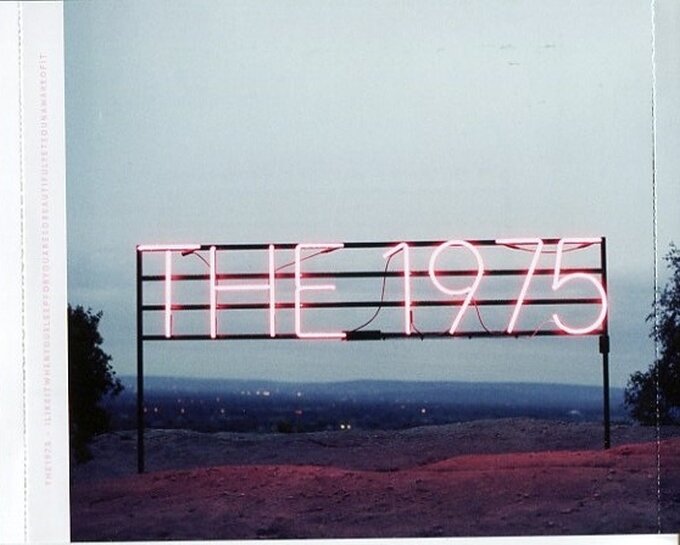 The 1975 — I like it when you sleep, for you are so beautiful yet so unaware of it
Formed: 2002 in Manchester, England
Location: Manchester, England
Album release: February 26, 2016
Record Label: Dirty Hit / Interscope / Polydor / Vagrant
Duration:
Tracks:
01 The 1975     1:23
02 Love Me     3:42
03 UGH!     3:00
04 A Change of Heart     4:43
05 She’s American     4:30
06 If I Believe You     6:20
07 Please Be Naked     4:25
08 Lostmyhead     5:19
09 The Ballad of Me and My Brain     2:51
10 Somebody Else     5:47
11 Loving Someone     4:20
12 I like it when you sleep, for you are so beautiful yet so unaware of it     6:26
13 The Sound     4:08
14 This Must Be My Dream     4:12
15 Paris     4:53
16 Nana     3:58
17 She Lays Down     3:58
2016 Dirty Hit under exclusive license to Interscope Records
Review
Winston Cook–Wilson // February 23, 2016 // Score: 8
)°—  The 1975 are driving a hard bargain. The shapeshifting Manchester band’s recent singles scan like ambitious blockbusters not made for a clear audience: too smart–aleck for Top 40 purists and too au courant for the record–collector types who share the band’s love for 30–year–old pop music. Yet somehow the 1975 continue to pack venues of big and very big sizes, chart singles both in the U.S. and their home country, and inspire fan fiction; one imagines the emo kids that helped them get here now cutting their bangs and giving Prefab Sprout and Level 42 a try.
)°—  But assuming the kids would have to backtrack to Get It gives the band too little credit. The sleek musical composites on the 1975’s mouthful of a sophomore album I like it when you sleep, for you are so beautiful yet so unaware of it — now with 65 percent less guitar–thrashing and bigger choruses — are always dominated by their unique and headstrong impulses. You can round up to Steve Winwood, or some precocious, laptop–toting electro–pop outfit that peaked in the last decade, depending on what strikes you sideways in these 17 songs. But don’t fool yourself: no singular likeness really fits this band’s unruly vision, and I don’t think Passion Pit would appreciate you bringing them into this.
)°—  The tacit argument of sleep is that the supermarket–pop songs with which the 1975 are enamored — lead singer Matty Healy calls them “big records” — took chances on being hateable. Healy knows the appropriate moment to cut the cord and leave a melodic idea as huge and stupid as it was when it first arose, preserving the spark allows it to either spellbind or alienate. How else do you come by a “Kiss on My List” or a “Candy?” Big risks for bigger rewards, presumably.
)°—  The same principle applies to the libretto, in which the most absurd or insouciant lines are highlighted instead of treated as jokey asides. Parts of “She’s American” and “Change of Heart” feel particularly apt — like a “Scrambled Eggs” not even trying to become “Yesterday.” Uncouth retorts (“You look s**t and you smell a bit”) and left–field references (“Even Guy Debord needed spectacles,” “I’ll quote On the Road like a twat and wind my way out of the city”) either undercut or enhance the melodrama, depending on which is required. As you’d imagine, the diciest moments end up being the hardest to resist.
)°—  Healy’s broad–stroke vision certainly doesn’t inhibit the rest of the band, who get blissfully lost in the weeds. Adam Hann, Ross MacDonald, and George Daniel create a melee of distended vocal samples, chicken–scratch guitar interjections, cavernous electro–acoustic polyrhythms, and the gauchest possible synth leads. All this, somehow, never crowds out whatever pithy scene Healy is attempting to put across: a one–sided conversation with a coke–addled narcissist (who may be Healy himself), the innocent beginnings of a corrosive relationship in bed, a strained lunch with an ex–lover snapping her salad plate for Instagram. The 1975 have a truly remarkable sense of when to leave space in a groove, and when to let it clot up, especially when you consider that they kept hired–gun specialists out of the studio; Ariel Rechtshaid need not apply. Even when they suddenly wade into a concerto for synth murmurs and New Age piano (“Please Be Naked”) — and subsequently, filmy post–rock which imagines M83 and Kevin Shields soundtracking City of Angels (“Lostmyhead”) — the music remains as dynamic and enjoyable as self–consciously indulgent gestures like these can possibly be.
)°—  Go ahead and tear down the 1975 for preening themselves on–stage or general pomposity; dissect and denounce their familiar–sounding tunes as bloodless facsimile. But faulting Healy and his cohorts for having too many impulses in different directions misses the point of i like it when you sleep… entirely, turning what makes it so exceptional into a pejorative. These songs have strong, familiar features, but they build off of one another; every one of them is full of hyperactive, bats**t detail that makes it immediately attributable to this band alone. Sit through the whole of this Homeric effort — for which the qualification “messy” seems too stern and reductive — and try not to come crawling back. These days there aren’t many Dudes With Guitars in the vicinity of the pop charts making records as uncompromising as this one. When was the last time that rock music with such a commanding voice had this much fashion sense? )°—  http://www.spin.com/
Also:
By Laura Snapes; February 25, 2016;  Score: 6.5
)°—  http://pitchfork.com/reviews/albums/21412-i-like-it-when-you-sleep-for-you-are-so-beautiful-yet-so-unaware-of-it/
By Andy Baber | first published: 24 Feb 2016 | Score: ***
)°—  http://www.musicomh.com/reviews/albums/1975-i-like-sleep-beautiful-yet-unaware
By Grant Rindner / 25 FEBRUARY 2016, 10:30 GMT / Score: 7
)°—  http://www.thelineofbestfit.com/reviews/albums/the-1975-i-like-it-when-you-sleep