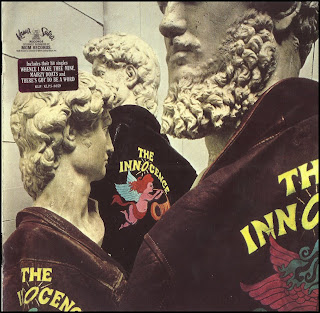 (1967 US, sunshine psychedelic pop, 2010 Rev Ola release)
Location:
Album release:
Record Label: Rev Ola
Although Memphis Sam Pearlman has lauded Rock's occasional awesome capacity for speaking without words, a more elusive standard has emerged for measuring rock achievement: speaking with words. Rock has always spoken through a tremendous array of perfectly appropriate "cliches." But that's just a basic ground for novel paths in use of the mere word and its extension and transcendence. Here is where The Innocence sums it all up.
Mairzy Doats is a readymade classic. Mere words reduced to mere sounds regrouped into new mere words which are somehow more poetically evocative than the originals. Here The Innocence speaks with somebody else's speech composed of just a pile of word play. Just playful as a silly kids' song, it has been allowed to crystallize into a monument to non serious word play. And now, after John Lennon's great books have validated just this type of "game." The Innocence has come to resurrect Mairzy Doats and give Rock an addition so perfect for Rock and so long inevitable.
And There's Got To Be A Word (Beyond the Meaning of Love) is even more than this. Groping for new words which mean more than words which already mean a whole bunch! Just look at the most obvious gem of all. The Innocence: you can even dig the pseudo-plural name of the group.
by Richard Meltzer

Toward the end of 1965, Peter and Vini accept an offer to move their services over to Artie Ripp’s Kama Sutra Records, then riding high with The Lovin’ Spoonful. Keeping the Tradewinds name, they quickly have another national hit with “Mind Excursion” and an album follows. Thanks to the good graces of Leiber and Stoller, the master of “New York’s A Lonely Town” is transferred to Kama Sutra and is included on the album.
The record is a hit and they send the road group out to promote the album while they continue their behind-the-scenes work. Not wishing to compete with their own group, Anders, Poncia and Ripp form a new studio-only band they call The Innocence and score with “There’s Got To Be A Word”, a song composed by their friend Don Ciccone of The Critters, a group they were producing at the time. An album follows, but the second single, “Mairzy Doats” stalls out and the name is laid to rest.
For their next release, Peter and Vini try a different tactic, releasing “Sunrise Highway” as a “Peter Anders” solo record. Despite heavy airplay, the record fails to hit the Hot 100 and the duo turn their attentions back to their studio duties. During their time with Ripp, Peter and Vini continue their whirlwind activities in the business, composing, producing and performing on dozens of records for Kama Sutra and it’s sister label, Buddah Records, as well as having their work leased out to other labels.
Their publishers, Hill & Range, were still working their compositions and dozens of covers were recorded for a run lasting through the end of the 1960s. Among the artists and musicians with whom they were associated during this time are Tommy James & The Shondells, Vince Edwards (TV’s “Ben Casey”), Bobby Bloom, Richard Perry, Ritchie Cordell, Bo Gentry, Kenny Laguna, Tony Bruno and Jay & The Americans.
Pete Anders - net
Tracks:
01. There's Got To Be A Word (Beyond The Meaning Of Love) (D Ciccone, Jimmy Wisner) - 2:25
02. Mairzy Doats (Drake, Hoffman, Livingston, Jimmy Wisner) - 1:14
03. Someone Got Caught In My Eye (Andreoli, Poncia Jr, Anders, Poncia) - 1:59
04. All I Ask (D Ciccone, Jimmy Wisner) - 2:48
05. Your Show Is Over (D Ciccone, Jimmy Wisner) - 2:45
06. A Lifetime Lovin' You (Andreoli, Poncia Jr, Anders, Poncia) - 2:21
07. Whence I Make Thee Mine (Andreoli, Poncia, Cordell, Jimmy Wisner) - 1:44
08. It's Not Gonna Take Too Long (Andreoli, Poncia Jr, Anders, Poncia) - 2:05
09. All I Do Is Think About You (Linde, Bloom Jimmy Wisner) - 2:30
10. I Don't Wanna Be Around You (Ripp, Andreoli, Poncia Jr, Anders, Poncia) - 2:08
11. Do You Believe In Magic (J Sebastian, Jimmy Wisner) - 2:23
12.  I Don't Wanna Be Around You (Bonus Track, Single Version) (Ripp, Andreoli, Poncia Jr, Anders, Poncia) - 2:08
13. There's Got To Be A Word (Beyond The Meaning Of Love) ( Bonus Track, Single Version) (D Ciccone, Jimmy Wisner) - 2:24
The Innocence:
*Peter Anders
*Vini Poncia
*Artie Ripp

Review by Richie Unterberger
When it comes to records on which they were the performers, prolific songwriters, singers, and producers Pete Andreoli and Vinnie Poncia, Jr. might be best known for their discs as the Tradewinds. Lesser known is this 1967 self-titled album by the Innocence, which is pop/rock at its bounciest and frothiest. It's an apt title for both album and band, considering it's from a time when much rock was getting decidedly less innocent by the minute. In contrast, the Innocence offered perky, well-crafted to the point of well-scrubbed tunes with the slightest of influences from folk-rock and psychedelia. Some of the songs -- including the Top 40 hit "There's Got to Be a Word (Beyond the Meaning of Love)" and the smaller hit "Mairzy Doats" -- could have been relics from the Tin Pin Alley/music hall era, though dressed up with harmonies and arrangements that could have only been possible in the sunshine pop era. This might be too sweet even for big fans of this sort of stuff, though it does vary the pace a little with bits of folk-rockish balladry ("Someone Got Caught in My Eye"), Motown ("All I Ask"), bossa nova ("Your Show Is Over"), and labelmates the Lovin' Spoonful (slightly recalled by "It's Not Gonna Take Too Long," and covered to unnotable effect on "Do You Believe in Magic"). The CD reissue on Rev-Ola has basic historical liner notes and two bonus tracks: the single versions of "There's Got to Be a Word (Beyond the Meaning of Love)" and "I Don't Wanna Be Around You."